Featuring time-saving and fast Customs clearance process, the China-Europe rail freight service between Shanghai and Germany's Hamburg has been enjoying a growing reputation among global importers since its launch in October. 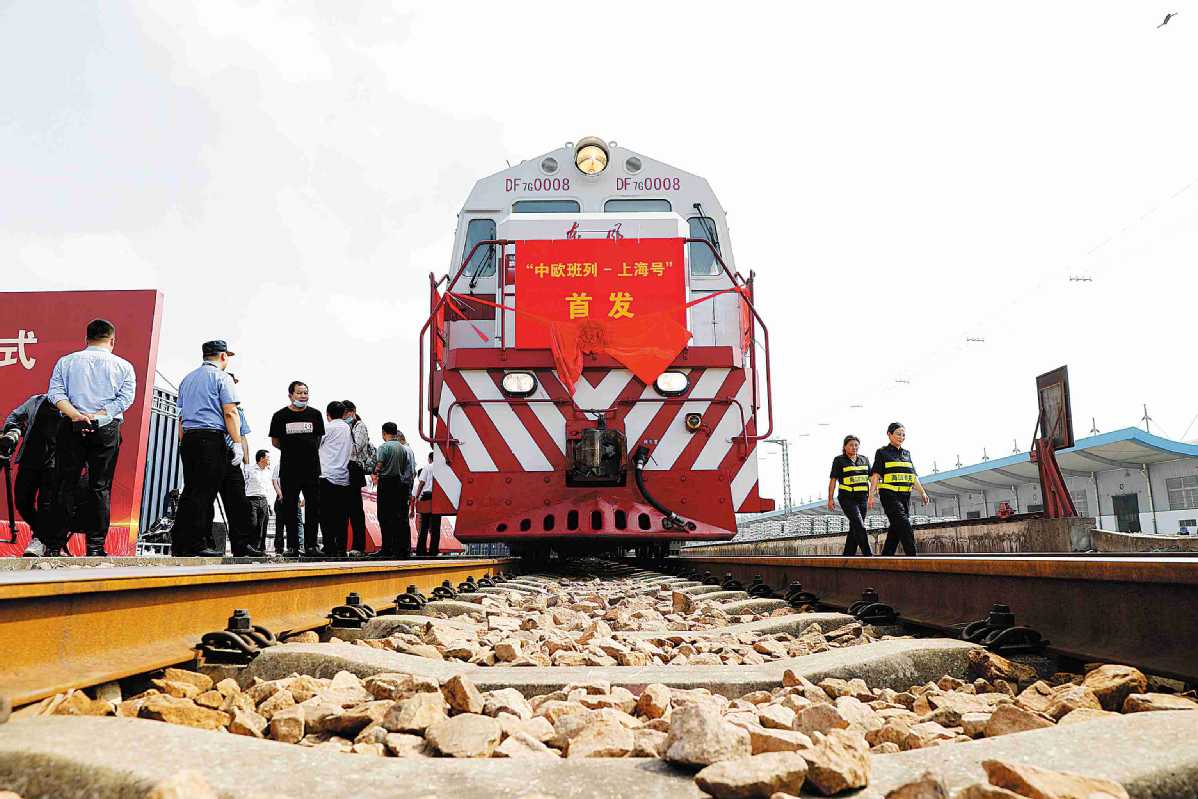 The China-Europe rail freight train prepares for its first run from Shanghai to Germany at Shanghai Minhang terminal in October. (Photo provided to China Daily)

A route connecting many major hubs in Poland, Belarus, Russia and Kazakhstan, the service has played a key role in boosting trade among markets. It also helped exhibitors of the fourth China International Import Expo, which was held in Shanghai earlier this month, deliver their high-end equipment to their booths for visitors.

Bosch Thermotechnology, a German energy management solutions provider and a CIIE participant, is one of the enterprises taking advantage of the freight service.

The company managed to bring its Condens 7000 WP, a smart heating boiler, from Germany to the exhibition hall. The Shanghai event was its global debut stage after it was launched in the Netherlands, said Wang Yunfeng, senior marketing director of Bosch Thermotechnology China.

"The COVID-19 pandemic has driven more people to furnish their home offices, and we have seen a surge in demand for high-quality German products in the Chinese market," Wang said. "The transit by sea takes too long－normally 60 days－and by air too expensive. So rail freight is our best choice, not to mention the China-Europe freight train service has been this convenient."

As such, rail freight became the most suitable option for large, high-end products. Wang added his company has been utilizing the freight service connecting Chongqing with Hamburg.

"We have been ordering goods in advance, to leave extra time for transport from Chongqing to other domestic cities," he said. "With the Shanghai-Hamburg route already under operation, we are considering changing to the route from Shanghai to Germany in the near future, as our main domestic warehouse is based in Taicang, Jiangsu province, a neighboring city of Shanghai."

Data from China Railway showed that in the first 10 months of this year, there were 12,605 China-Europe railway lines under operation, up 26 percent year-on-year, transporting 1.216 million TEUs (twenty-feet equivalent units) of goods, an increase of 33 percent from the same period last year.

A main reason behind the surge was the growth in bilateral trade between Germany and its largest importer China. According to a Xinhua report, bilateral trade between the two countries rose 3 percent year-on-year to 212.1 billion euros ($238.06 billion) in 2020, with 116.3 billion euros worth of goods exported to China, a rise of 5.6 percent from 2019.

For Germany, electrical equipment and optical products are the most popular imports from China, while automobiles take up the major part of Germany's exports to China, said financial media outlet Yicai.

Developing industries such as new energy vehicles and high-end equipment are a key part of Shanghai's efforts in becoming a global innovation hub, experts said.

To this end, the route between the metropolis and Germany will be "crucial for international logistics, and the Minhang terminal will be a core distribution hub in the eastern coastal area to strengthen Shanghai's role in allocating global resources", said Wang Jinqiu, president of Orient Silk Road Co, a Shanghai-based railway management firm which helps operate China-Europe rail freight from Shanghai.

"An advantage of the rail freight is that declarations and inspections are also handled faster than air and sea freight," said Wu Tuzi, vice-manager of the Shanghai company.

"We are committed to building in Shanghai an open and market-oriented interchange hub which is fitted with all the equipment required to handle goods in an efficient manner, as well as a platform that welcomes third-party logistics companies to jointly promote the sustainable development of the hub," Wu said.

"We have received many orders from international companies so far, and more routes from Shanghai to Russia or Central Asia areas will likely open in the future."