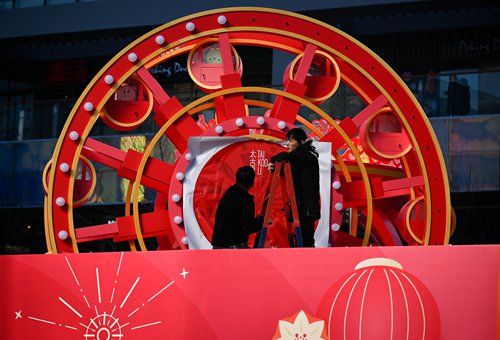 Two workers set up a display outside a store at a business area in Beijing on Wednesday. Beijing's 2018 GDP growth was around 6.6 percent, legislators said at a conference on Monday. (Photo: AFP)

The Chinese economy may face a barrage of challenges ahead, but its rise from the depths of despair to a global economic powerhouse has not ended, as a key indicator is poised to tell that success story once again.

China's GDP per capita, a closely watched measure of a country's economic output that accounts for population, is expected to reach a key level of $10,000 in 2018, according to a top official on Wednesday.

"Our country's population is equivalent to the total population of all developed countries and it is estimated that the GDP per capita will approach $10,000 in 2018," He Lifeng, chairman of the National Development and Reform Commission (NDRC), the top economic planner, wrote in an article published on Wednesday.

While $10,000 is still significantly lower than that of other developed countries, it represents a remarkable development for a country with more than 1.3 billion people, nearly 20 percent of the global population, analysts noted.

China's total GDP has risen to the second largest in the world. Its GDP per capita, which is often seen as a measure of living standard, has been low, due largely to its massive population.

"Indeed, our GDP per capita is still far lower than [that of] advanced economies, but let's not forget where China started and what China went through," Cao Heping, a professor of economics at Peking University, told the Global Times on Wednesday.

"With a GDP per capita of $10,000, it means China, with its massive population, has become an upper middle income country, according to UN standards," said Tian Yun, vice president of the Beijing Economic Operation Association. "That in itself is a remarkable achievement." China's GDP increased 82 times to $12.24 trillion in 2017, or 15 percent of global economy, making it the world's second-largest economy

However, with new milestones come new challenges. As the Chinese economy continues to march forward, potential challenges and risks are also on the rise, with some even suggesting that China would fall into the so-called middle income trap.

The term first appeared in a World Bank report in 2007 and describes the failure of middle income countries such as Malaysia, Brazil and South Africa to become high income countries as their growth stagnated, industrial upgrade failed and the labor force shrank.

Given China's economic slowdown in recent years, many have used the term to determine China's future.

"No doubt, after reaching such high numbers, it would become more and more difficult to move up," Tian said, noting that slowing growth, a deteriorating environment and others "do indicate that we are facing some of the challenges those countries have faced. And this is alarming."

Following double digit growth for decades, the Chinese economy is faced with persistent slowdown pressure, with low-end manufacturing losing its competitive edge as labor and other costs increase and growth in consumption also slows, according to official data and media reports.

But in recent years, China has had a laser-like focus on manufacturing upgrade and technological innovation, which have advanced in core technologies such as 5G and new-energy vehicles, and accelerated the urbanization point to a more positive picture, Tian noted.

Cao also said that if China properly uses its "massive strength" in terms of GDP to focus on improving education, infrastructure and other areas to support high-quality growth, "there is no trap that can trap China's growth."

In his article published in the Qiushi Journal, a flagship magazine of the Communist Party of China Central Committee, He, the NDRC chief, said that China would focus on boosting domestic consumption to spur high-quality growth.

Cao noted that while GDP per capita does not translate into purchasing power, it could also point to a higher standard of living and higher demand for quality goods.

"A consumption upgrade could be the most important driving force for China's economic upgrade," he said.