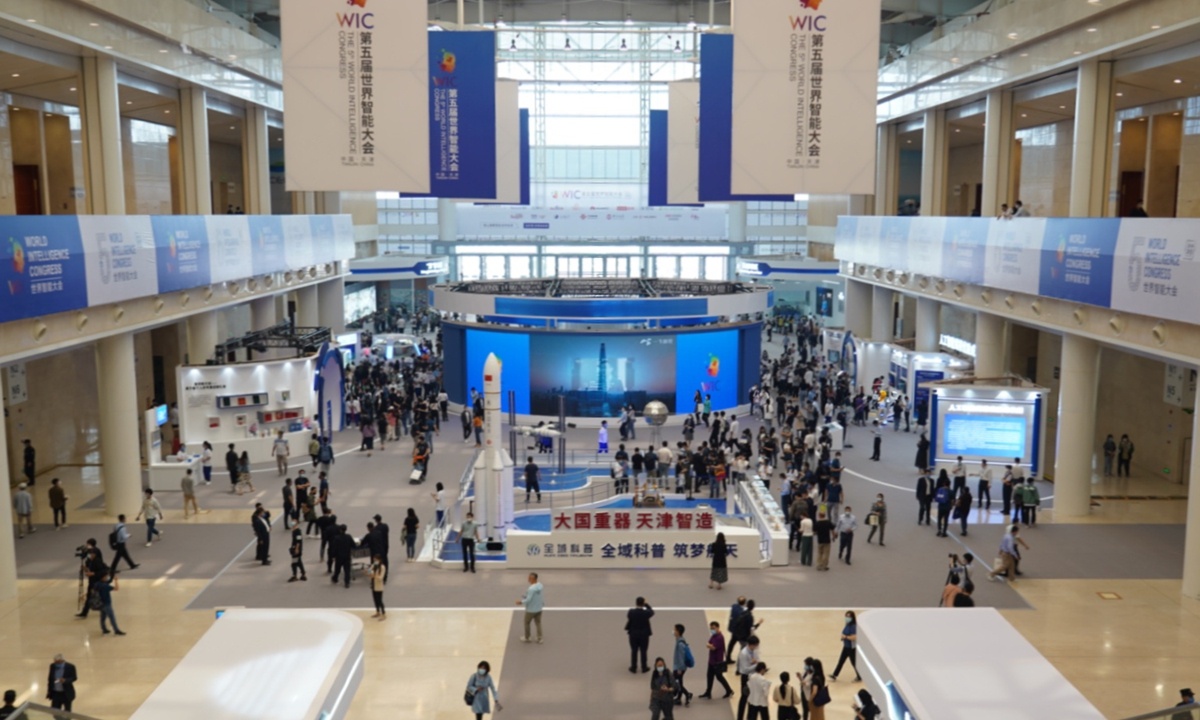 From dancing robots and 5G appliances, to solutions for smart factories and logistics, "intelligent transformation" was the key word during the ongoing fifth World Intelligence Congress (WIC) in North China's Tianjin Municipality on Thursday.

At the event, leading technology companies, factories and industry experts offered visions of fully automated factories that will produce clothes, food and supercomputers, while calling for efforts to capture the intelligent trend to further strengthen China's manufacturing prowess amid external challenges and the coming 5G era.

The WIC, with a theme this year of empowering new development and fostering new patterns, is offering a combination of online and in-person activities from Thursday to Sunday - thanks to China's efficient control of the COVID-19. Last year's conference was held online due to the epidemic.

At least 241 enterprises and groups are participating in the event, including 24 research institutes, leading technology companies such as Huawei, Tencent and Alibaba, and foreign companies like Panasonic.

The event will offer 18 parallel forums and 12 themed forums about the latest trends in intelligence, and 48,000 square meters of smart technology exhibitions will be open to the public.

China has become the world's largest manufacturing and internet industry market. Market demand will inevitably give birth to innovative technology and innovative products, and it will also create more artificial intelligence (AI) application markets, Wan Gang, former minister of science and technology, said at the opening ceremony on Thursday.

China's AI applications in sectors such as smart cities and industrial scenarios have created a good environment for the technological innovation and rapid commercialization of AI, and they will contribute to the global development of AI, Wan said.

China's leading role in AI development was on display at the event, where companies showed off their latest efforts and strategies for the coming intelligent era.

At the beginning of last year, Xiaomi's first-generation smart factory was officially completed, and it can realize production "in the dark," Lei Jun, founder of the Chinese smartphone maker, told a summit held during the WIC on Thursday.

In this unmanned factory, apart from a few pieces of equipment, the entire facility was completely created by Xiaomi or Xiaomi-invested companies, so the degree of localization is very high, Lei said. The factory has already started to produce some high-end mobile phones.

"We are now constructing the second phase of the factory, which can produce 10 million ultra-high-end smartphones. It's expected to be completed by the end of 2023, and it will achieve output value of 50 to 60 billion yuan," or about $7.67 billion, said Lei.

Xiaomi is apparently not the only company to have applied intelligence to manufacturing. Lenovo's chairman and CEO Yang Yuanqing also emphasized the importance of information technology (IT) amid China's industrial upgrading and transformation during the summit.

"We should empower the real economy with 'new IT,' promoting the transformation and upgrading of 'Made in China' to 'Intelligent Manufacturing in China'. This will push China's manufacturing as a whole to the mid-to-high end of the global industry chain," Yang said in a statement Lenovo sent to the Global Times on Thursday.

The real economy is the foundation of a country, and only with strong manufacturing ability can it help a country undergo complex and volatile economic patterns and industry cycles, Yang noted.

The next 15 years will be a critical period for the development of the core technology of the new round of industrial revolution and intelligent manufacturing, Wan said.

China's manufacturing sector must seize this one-time, historic opportunity, concentrate its superior forces to "fight a strategic decisive battle," and achieve a historic leapfrog, taking China's manufacturing industry from big to strong, Zhou Ji, member of the Chinese Academy of Engineering, said at a keynote speech during the forum.

China must have a global mindset and innovative self-confidence, and it must more actively integrate into the international AI innovation ecosystem, to advocate the concepts of open source and sharing and participate in the application of global AI research and development, Zhou added.