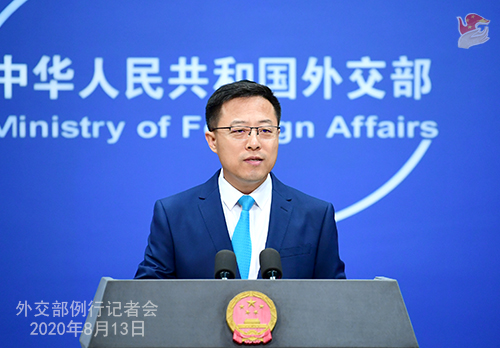 BEIJING, Aug. 13 (Xinhua) -- China will continue to expand its opening-up and optimize the business environment with an aim to provide more opportunities for companies around the world, a spokesperson said Thursday.

Foreign Ministry spokesperson Zhao Lijian made the remarks at a press briefing when asked to comment on a survey released by the U.S.-China Business Council (USCBC).

Noting that China's economic growth turned to positive in the second quarter, Zhao said the Chinese economy has withstood the impact of the epidemic and demonstrated strong resilience and development potential.

Zhao said China has a huge market of 1.4 billion people and a complete industrial support system, and many authoritative international organizations believe that China injects confidence and momentum into the world economic recovery.

At the same time, China continued to actively promote foreign economic and trade cooperation, which effectively boosted the total world demand and promoted the development of international trade, Zhao said, adding that foreign-funded projects with an investment of more than 100 million U.S. dollars increased to 320 in the first half of the year.

The USCBC is a trade group representing more than 200 U.S. companies that do business with China. Enditem