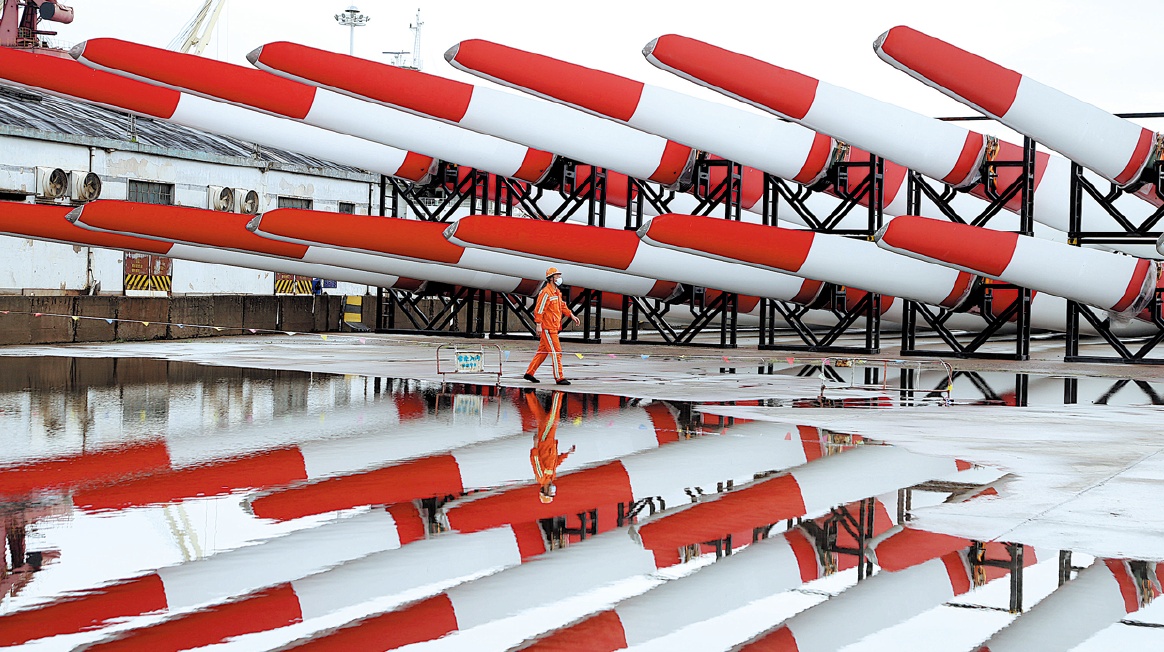 Wind turbine components are ready to be shipped from a dock in Lianyungang, Jiangsu province, on Thursday. (Photo: China Dailly)

China's gross domestic product expanded 12.7 percent year-on-year in the first half of 2021 and the country's GDP rose 7.9 percent in the second quarter from a year earlier, the National Bureau of Statistics said on Thursday. The 7.9 percent economic growth rate was slightly below market expectations and it decelerated from the 18.3 percent growth recorded in the first quarter.

Economists said the growth deceleration was due to the higher base in the second quarter of last year as the Chinese economy rebounded strongly from a historic contraction of 6.8 percent in the first quarter of 2020 when business activities were disrupted by the COVID-19 pandemic.

They said the slower growth does not mean that the prospects for the Chinese economy have worsened, as the latest economic data still points to stable and steady growth momentum for the world's second-largest economy.

On a quarterly basis, China's GDP grew 1.3 percent in the second quarter, compared with the 0.6 percent first quarter increase, according to the NBS. Retail sales grew faster than expected, rising 12.1 percent year-on-year in June, while industrial production increased 8.3 percent from a year ago.

"China has managed to maintain a relatively high growth rate in the first half of the year. If we look at the GDP data on a quarterly basis, the notable growth in the second quarter means that the trend of steady economic growth has not changed," said Yu Miaojie, deputy dean of Peking University's National School of Development.

But economists see rising pressure on the recovery of the Chinese economy amid soaring raw material prices and the possible policy shift of the Federal Reserve of the United States against the backdrop of rising inflation and the improved employment outlook in the US.

Such a trend may prompt China's policymakers to pay more attention to the downside risks and roll out more supportive measures to boost domestic demand and private consumption and to further unleash the country's growth potential, they said.

"One potential risk is the rising commodity prices in the international market, which will lead to higher costs for companies and squeeze their profit margins," Yu said. "China's monetary policy will continue to be prudent while policymakers will work to ensure a reasonable increase of social financing and money supply to drive economic growth in the second half of the year."

Most economists saw the recent move by China's central bank to cut the reserve requirement ratio for banks as a forerunner of Beijing's policy adjustment in the second half of the year, but they do not view the RRR cut as the start of a new round of massive policy easing.

"China's monetary policy will likely be more flexible with appropriate fine-tuning in the second half of the year. It will focus on increasing liquidity while maintaining the prudent stance and overall stability," said Robin Xing, chief China economist at Morgan Stanley.

"China still has greater policy room than some developed economies which have almost exhausted their policy tools," he said.

Wen Bin, chief researcher at China Minsheng Bank, said that China's policymakers will step up monetary support to help smaller businesses offset the impact of rising commodity prices while expanding fiscal spending and increasing the issuance of local government bonds to boost the role of investment as a key growth driver.