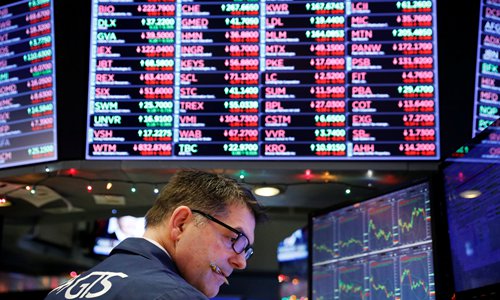 A trader works on the floor of the New York Stock Exchange shortly after the opening bell in New York. (Photo: VCG)

Turmoil on the US stock market will have a limited impact on Chinese stocks and could instead become a rare opportunity for China, Chinese analysts said on Tuesday.US stocks, on track for their worst year since the global financial crisis of 2008, could provide a window for China's increasingly opening A-share market to become a safe haven for global investors and weaken US officials' hands in their trade war with China, analysts argued.Coming off the worst week in a decade, US stocks on Monday continued to nose-dive and suffered the sharpest declines in decades ahead of the Christmas holiday. On Monday's shortened holiday trading session, the Dow Jones Industrial Average fell 2.9 percent, its worst Christmas Eve performance since 1918, while the tech-heavy NASDAQ Composite Index dropped 2.2 percent, sinking deeper into bear market territory. The S&P 500 index also declined 2.71 percent."There is no question that the US stock market is heading toward the end of its decade-long bull run," Dong Dengxin, director of the Finance and Securities Institute at Wuhan University of Science and Technology, told the Global Times on Tuesday. And like during the global financial crisis, a US stock sell-off could have a "major impact" on stock markets around the world, he said.After the US stock sell-off, equity markets in Europe and Asia also fell sharply. In Japan, the Nikkei 225 Stock Average slipped below the 20,000 level for the first in more than a year on Tuesday and headed for bear market territory. In the UK, the FTSE 100 closed 0.5 percent lower on Monday, its weakest close in more than two years.Chinese equities were not spared. Before climbing back, major indexes on the Chinese mainland opened lower. The Shenzhen Component Index opened 1.14 percent lower, while the Shanghai Composite Index opened 0.91 percent lower.No panicChina need not panic as the Chinese stock market is well positioned to respond to the impact from the US stock turmoil, according to Chinese analysts."I think the impact has more to do with sentiment," Xu Gao, chief economist at China Everbright Securities Asset Management, told the Global Times on Tuesday. And sentiment could improve as China is pushing through reforms and other measures to support a slowing economy, he said."I doubt we will see a stimulus package like the 4 trillion yuan after the financial crisis in 2008, but there is no doubt that China will pursue other fiscal and monetary stimulus policies," Xu said. He pointed out that Chinese stocks, which tend to move in lockstep with US stocks, especially during bear markets, are now moving more independently because of reforms.Such a divergence was already on display. While US stocks rallied earlier this year, Chinese mainland stocks fell sharply. For example, before starting to fall from all-time highs on October 2, the S&P 500 had gained about 8.4 percent in the year, while China's blue-chip CSI 300 Index had lost 18.9 percent.This divergence also pointed to the fact that while the US stock market formed a bubble, with prices flying high, Chinese stocks have done the opposite, hitting bottom, according to Dong.Going forward, "while US stocks could dive further, the A-share market could gradually bottom out, rebound and take an independent path," Yang Delong, chief economist at the Shenzhen-based First Seafront Fund Management Company, said in a note sent to the Global Times on Tuesday.Rare opportunity But Chinese analysts said the US stock sell-off could offer chances for the Chinese A-share market."I actually think that this could be a great opportunity for the A-share market. In other words, the A-share market could become a safe haven for global capital once they retreat from US stocks," Dong said.China has been pushing through reforms in recent years, aiming to open its financial market to global investors. It has already launched stock connections between the mainland and Hong Kong stock markets, offering a rare channel for global investors to purchase Chinese stocks. China is also preparing a stock connection with London, which would open the avenue further.Global interests in Chinese A-shares are already on the rise, analysts noted. Foreign capital in the A-share market could reach 300 billion yuan ($43.56 billion) this year and rise to 400 billion in 2019, according to Yang.The turmoil in Wall Street could also weaken US President Donald Trump's hand in his trade war with China, experts hoped. Trump has repeatedly cited the US stock market's bull run as an asset for taking on China in the tit-for-tat tariff war."After this round of correction in US stocks, Trump will no longer have enough stamina to fight a trade war. The larger the correction, the more positive the outlook for China-US trade," Xu said.