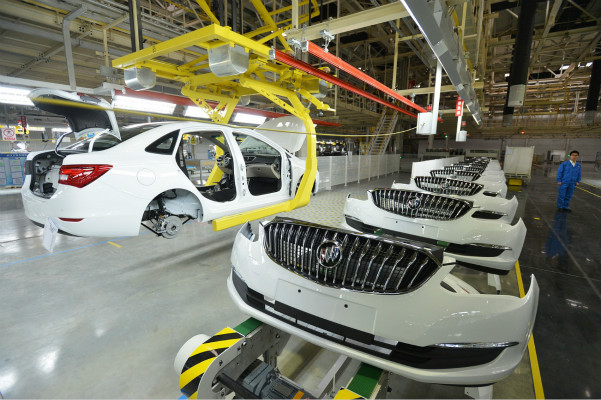 SAIC General Motors Corporation, a joint venture founded in 1997 between China's SAIC and General Motors from the United States, mainly manufactures and sells Chevrolets, Buicks and Cadillacs on the Chinese mainland.

During the past five years, the company has made great achievements in terms of its development speed and quality, Blissett told Xinhua when commenting on the report delivered by Chinese leader Xi Jinping to the 19th National Congress of the Communist Party of China (CPC).

From the report, Blissett saw that "China will substantially broaden market access and protect the lawful rights and interests of foreign investors. The investment environment keeps improving and we have full confidence in the following market exploration."

China (Shanghai) Pilot Free Trade Zone (FTZ), where SAIC-GM is located, was launched in 2013 to test new policies including negative list management for foreign investment, preferential trade and financial policies, and opening up of more industries to foreign investors.

As of September, 49,000 new companies had been registered in the FTZ. Of these, about 8,940 foreign-funded enterprises had been launched, attracting investment worth more than 17 billion U.S. dollars.

China has ranked among the world's top three in terms of foreign investment utilization for five years and its engagement in global economic governance is deepening.

In the first nine months of 2017, foreign investment utilization in China hit more than 618 billion yuan (93 billion U.S. dollars), up 1.6 percent year on year, according to the Ministry of Commerce.

More than 23,500 foreign-funded enterprises were established in the first nine months, 10.6 percent more than in the same period of 2016, the ministry said.

Harley Seyedin, president of the American Chamber of Commerce in South China, which represents more than 2,300 multinational companies doing business in China, said that he believes China will become more and more open.

Xi's report draws "a very clear map and direction for foreign investors going forward" as China's economy has been transitioning from a phase of rapid growth to a stage of high-quality development, said Seyedin.

In the past five years, the transition of China's growth pattern has created uncertainties in its investment market, which resulted in a slowdown of foreign investment inflow, said Seyedin. "But all of that uncertainty seems to be going away at this point and with the 19th CPC congress, we'll have a very clear map and direction for going forward."

"At 6.9 percent growth, China produces more quality jobs than it did when it grew at 12 or 13 percent, especially in the manufacturing sector. So the growth transition is on its way and we certainly believe that the future is going to be bright," said Seyedin.

According to figures released by Chinese Academy of International Trade and Economic Cooperation under the Ministry of Commerce, in the past, nearly 70 percent of foreign investment flowed to China's manufacturing sector, while 30 percent went to the service industry.

Now around 65 to 70 percent of China's foreign investment flows to the service industries especially to knowledge, technology and talent intensive areas, while the high-end manufacturing has attracted about 30 percent.

But there are still some areas in the service sector not open to overseas investors, said Daniel Liao, China president of Singaporean company City Developments Limited.

The company has invested about 1.7 billion U.S. dollars in the real estate, environmental protection and new energy sectors in major Chinese cities in the past six years.

The report said China will relax controls over market access in the service sector, which will attract more high-quality foreign investment to the sector and create more investment opportunities for foreign investors, according to Liao.