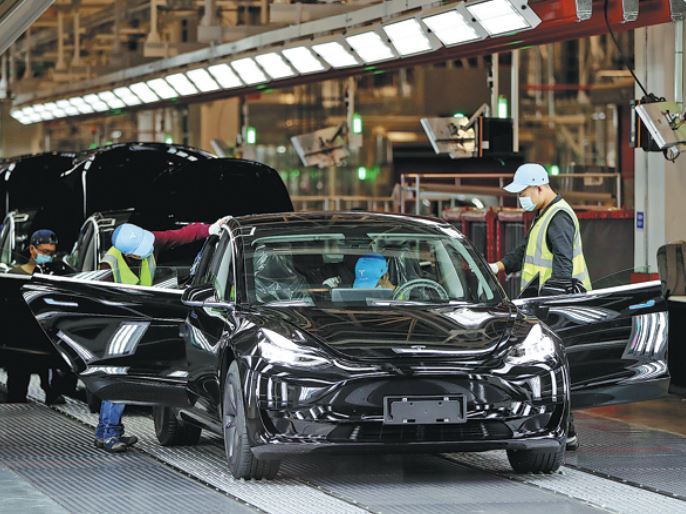 Electric carmaker Tesla is the first to benefit from the cap removal when it started the construction of its wholly-owned plant in Shanghai in January 2019. (Photo: Xinhua)

This story is part of an ongoing series on the development of China's automobile industry during the 13th Five-Year Plan (2016-20), when the world's largest auto market opened even wider.

In 2018, China pledged to gradually remove limits on foreign investment in the country's car manufacturing joint ventures while also phasing out all equity caps in the automotive industry within five years. Officials say opening-up can invigorate the market, force companies to innovate and integrate Chinese resources with international resources.

The 50 percent cap, put in place in 1994, was removed for international manufacturers of new energy vehicles and commercial vehicles in 2018 and 2020, respectively. The limits will be scrapped for gasoline passenger car producers starting in 2022.

United States electric carmaker Tesla was the first to benefit from the cap removal and kicked off the construction of its wholly-owned plant in Shanghai in January 2019. The first vehicle rolled off the assembly line in the same year.

German premium carmaker BMW inked deals in October 2018 with its Chinese partner Brilliance Auto, raising its stake from 50 to 75 percent in its passenger car joint venture BMW Brilliance in 2022. With the move, BMW would became the first foreign automobile manufacturer with a majority stake in a gasoline car making joint venture.

This year, German auto giant Volkswagen AG increased its stake in its electric car partnership with JAC Motors from 50 to 75 percent, making Volkswagen the first foreign carmaker to have a controlling stake in a Chinese joint venture.

Volkswagen said it will introduce products under its mainstream brands into the partnership and expand its production capacity to 350,000 to 400,000 units a year by 2029.Volkswagen AG plans to sell 1.5 million new energy vehicles in China a year by 2025. Besides JAC, it also has partnerships with FAW Group and SAIC Motor.

Industry experts said removing the cap will result in stiff competition, but will ultimately benefit the market. Furthermore, the investments show the potential of the country's car market and China's growing openness to the outside world.

To stimulate green-car development, China began offering subsidies on new energy vehicles in 2009. And the subsidies planned to end by the end of 2020 were extended for another two years.

Under the new plan, China is to cut subsidies by 10 percent, 20 percent and 30 percent year-on-year until their expiration by the end of 2022.

Extending the subsidies will help offset the impact of the pandemic while boosting car sales, increasing the sector's competitive edge and finally promoting its high-quality development, authorities said.