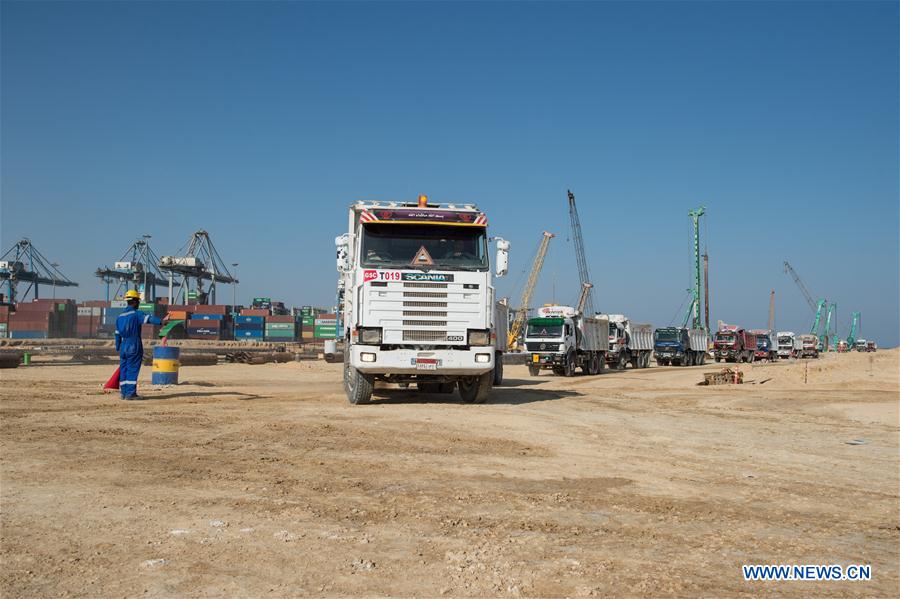 The project was assigned to CHEC by the Sokhna branch of the Emirati corporation DP World, the main investor and container operator in the port located at the Gulf of Suez.

At a launching ceremony, CHEC said it will deliver the "Basin 2" project in fewer than 12 months ahead of the deadline.

"Today's event is to show our determination to finish the project quickly and with high quality," Chen Shuang, deputy director of CHEC marketing department, told Xinhua at the construction site.

Sokhna Port is located within the Suez Canal Economic Zone (SCZone), a main economic region in Egypt whose development is one of the country's mega projects to attract foreign investments for further economic growth.

Mahfouz Taha, SCZone vice chairman, hailed CHEC as "one of the largest and most remarkable port builders and designers in the world," eyeing further cooperation with the Chinese side in the economic zone in the light of China's Belt and Road (B&R) Initiative.

The initiative, proposed in 2013, refers to the Silk Road Economic Belt and the 21st Century Maritime Silk Road. It aims at building a trade and infrastructure network connecting Asia with Europe and Africa along the ancient Silk Road trade routes.

"We are stretching our hands to our Chinese friends and we are encouraging all aspects of the initiative," said the Egyptian official, stressing that Egypt can be one of the main hubs for the initiative rather than a transit point.

For his part, Ajayy Kumar Singh, CEO of DP World Sokhna, said CHEC agreed to deliver the project in 2019 and he is confident of its ability.

"CHEC is one of the leading operators in building ports. We're happy to partner with them in this Basin 2 project. We're quite hopeful that they will deliver the project much ahead of the target date," Singh told Xinhua.

He said his company selected CHEC from many bidders to carry out the project after it met all the strict specifications set by DP World.

"Egypt has been growing tremendously in the last couple of years with new investments coming in, which has basically created a demand for a new additional capacity for our business in Egypt," Singh explained, adding that the new terminal basin is part of DP World's expansion plan for Sokhna Port.

"This growth defines that Egypt has the potential to be a top country in the MENA region with its location at the edge of the Suez Canal that opens up a lot of trade routes to the country," the chief of DP World Sokhna said.

Dozens of enthusiastic Egyptian and Chinese workers as well as scores of trucks have been mobilized to start the new phase of the "Basin 2" project that is expected to be completed by the last quarter of 2019.

Ahmed Omar, deputy project manager who has been working for CHEC for 10 years, said the second terminal basin is being built without dredgers through dry excavation, "which reduces the project cost by more than 30 percent."

"During the 100-day mobilization stage that started in late May, we safely brought all the materials and heavy equipment and finished a large part of dry excavation, so the project will be finished in fewer than 12 months, which is ahead of the timeline," Omar told Xinhua.

The first terminal basin is already operating and the second one which is under construction, will be 1,350 meters long and lengthen the first one to receive more ships.

"The project will increase the annual number of containers to 2 million and attract more shipping lines for container transit in the port," the Egyptian engineer pointed out.