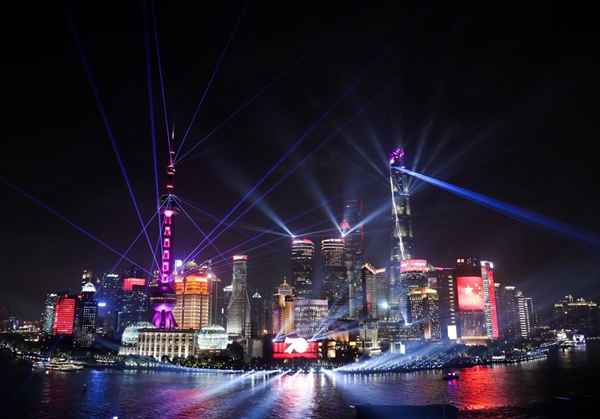 Photo taken on Sept. 30, 2019 shows a night view of the Lujiazui area on the eve of China's National Day in east China's Shanghai. (Photo: Xinhua)

Chinese authorities have the policy space to tackle economic downside risks, but the counter measures need to be consistent with the structural rebalancing of the country's economy in the longer term, the World Bank said on Thursday.

The bank maintained its prediction that China's economy will grow at a rate of 6.1 percent this year, before moderating to a projected rate of 5.9 percent in 2020 in its updated research released in December, unchanged from the previous forecast in October.

The moderate industrial growth and external risks may add to the pressure of a growth slowdown in the short term, the December edition of China Economic Update, said a brief report released by the bank.

China's GDP growth slowed to 6 percent year-on-year in the first three quarters of 2019, down from 6.6 percent in 2018. The slowdown featured a deceleration in investment growth and weaker investor confidence amid heightened trade policy uncertainty.

The "Phase One" trade agreement between China and the United States has boosted market confidence, and analysts expect the good news can avoid further escalation of trade disputes and lead to higher trade flows.

A permanent resolution of bilateral trade tensions would be essential to reduce the negative impacts on the world's second largest economy, said the World Bank.

Other external risks include a sharper-than-expected slowdown in major economies, particularly in parts of Europe, and weaker global trade and investment, it said.

Domestically, growth may suffer from the potential adverse effects of financial de-risking in the short term, given its asymmetric impact on private sector financing and the risk of a disorderly unwinding of excessive leverage, the bank explained.

"Policies need to be carefully balanced to reduce cyclical risks to growth while staying the course on the necessary deleveraging of the economy," said Martin Raiser, World Bank country director for China. "This may require tolerating slower but safer growth in the short term."

"If downside risks lead to a sharp reduction in growth, the authorities have policy space to act, but this needs to be done in a way that is consistent with the desired rebalancing of the economy toward consumption, services, and private investment and with reducing financial and corporate sector risks," Raiser said.

Infrastructure investment, as Song mentioned, is expected to be the major driving force to support the economy and avoid a sharp slowdown.