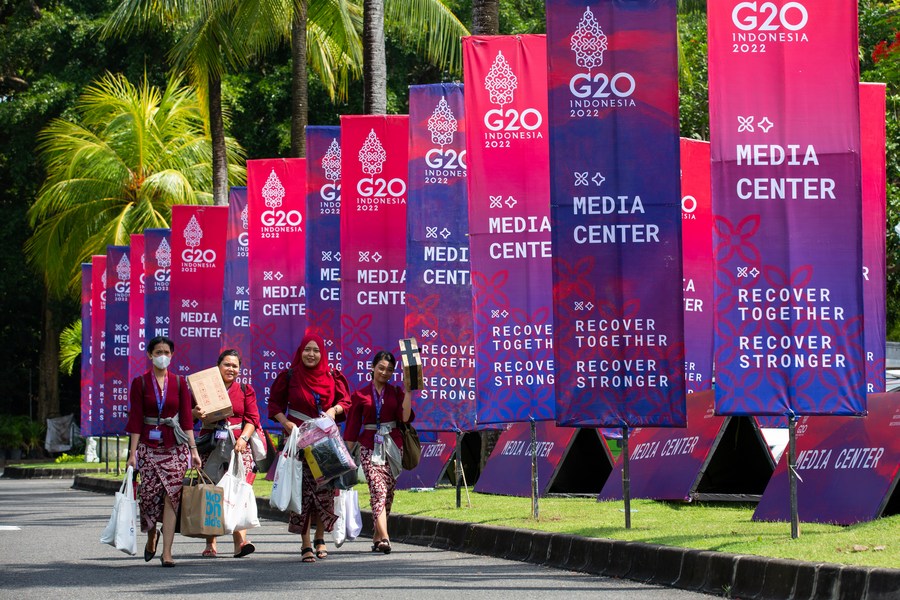 At present, the continued recurrence of the COVID-19 pandemic, fragile world economic recovery, geopolitical tensions, and multiple food and energy crises have dampened global growth prospects. Emerging and developing countries in particular face the risk of a "hurricane" brought about by rising energy costs and food insecurity. These difficulties, coupled with high inflation, a stronger dollar and rising interest rates, have plunged millions of people into poverty and hunger.

The IMF expects global inflationary pressures to be high in 2022, with inflation in countries experiencing conflict, turbulence or major economic problems well above the global average of 8.8%. A prolonged period of increased inflation could prompt policy tightening, higher than expected interest rates and further tightening of global financial conditions. Manufacturing PMIs for many G20 countries have fallen from expansionary earlier this year to contractionary territory. The IMF has lowered its global economic growth forecast for 2023 to 2.7% from 2.9% predicted in July.

As the two largest economies in the world, the return of China-U.S. relations to a track of healthy and stable development is crucial to the global recovery. Fighting trade and technology wars, forcefully pushing "decoupling and chain breaking", and violating international trade rules will only harm others and not benefit themselves, as Xi said during the China-US bilateral meeting in Indonesia. It is very important that China and the United States follow the principles of mutual respect, peaceful coexistence and win-win cooperation to avoid confrontation or even conflict in the future.

The G20 Summit in Indonesia coincided with the successful conclusion of the 20th National Congress of the Communist Party of China. The report of the 20th National Congress clearly stated that, after eradicating absolute poverty and completing the building of a moderately prosperous society in all respects, China will move towards the goal of constructing a modern socialist country in all respects, basically achieving socialist modernization by 2035. China will be a great modern socialist country that is prosperous, strong, democratic, culturally advanced, harmonious, and beautiful by the middle of this century. It is particularly emphasized to accelerate the construction of a modern economic system, improving total productivity and the resilience and safety of the industrial supply chain. China has become a major trading partner of more than 140 countries and regions, has signed 19 free trade agreements with 26 countries and regions, and has remained the world's largest trading country for five consecutive years. To maintain diversified and stable international economic patterns and economic and trade relations, and to steadily expand institutional opening-up based on rules, regulations, management and standards are vital not only for China, but the whole world.

At the international level, China has fully implemented the G20 debt relief initiative, with the largest total debt relief among G20 members, providing support for relevant developing countries to tide over difficulties. In 2022, China proposed cooperation initiatives on global food security and the G20 Action on Digital Innovation and Cooperation at the G20 meeting. China also hosted a ministerial meeting of the Group of Friends of Global Development Initiative, and released the list of the first batch of proposed projects, including 50 practical cooperation projects in poverty reduction, food security, industrialization and other fields and 1000 capacity-building projects. China has also launched an initiative of international cooperation on resilient and stable industrial and supply chains with Indonesia, Serbia and other six partners, and called for partnership to develop global clean energy supply chains ahead of COP27. China has also worked with the Food and Agriculture Organization of the United Nations in the fields of digital and agricultural innovation, sustainable soil and water resource management, and with the World Customs Organization to promote smart customs, smart borders and smart connectivity in the digital era.

In general, as a major developing country, China is capable of leveraging its international influence to work with other economies to create an international environment conducive to global development, foster new growth drivers, and make global governance more just and equitable.