HANOI, Nov. 10 (Xinhua) -- It is almost midnight and Dinh Thi Thu Huong, a 26-year-old Hanoian, is still keeping her eyes wide open. Her fingers swipe on the mobile phone's screen, selecting items from the online shopping platform Shopee and put them in a to-buy basket. 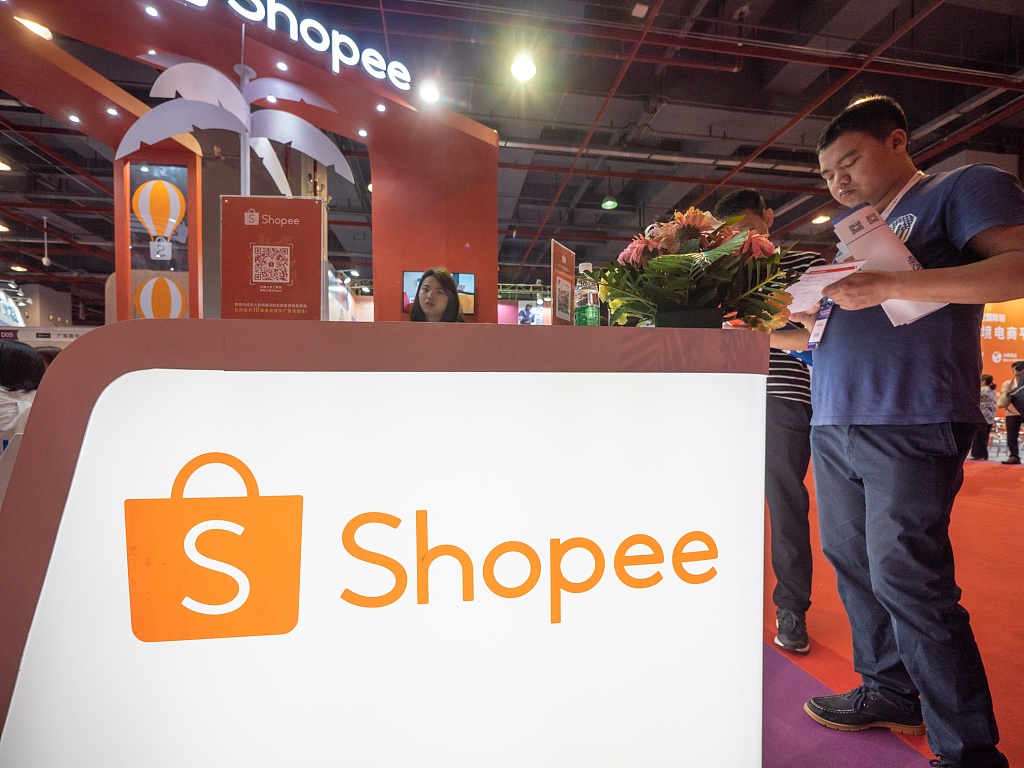 "I've been waiting for this 'big day' for months," Huong told Xinhua, explaining that she is preparing for the sales on the Singles Day, or the Double Eleven, which falls on Nov. 11, a super online shopping day which originated in China, and now getting popular in Vietnam.

"Double Eleven is becoming a phenomenon in Vietnam, a version of 'Black Friday' for online shopping," Huong told Xinhua, adding that she is impatiently waiting to place some 10 orders on this Double Eleven.

With attractive discounts and promotion policies announced weeks ahead of Nov. 11 by China-invested e-commerce retailers like Shopee, Vietnamese shoppers are grasping the chance to acquire their in-need products at the "crazy" best prices of the year.

"The trick here is you put your needed items in shopping baskets in advance, find the limited promotion codes and place orders as fast as you can. It's a paradise for bargain shoppers," the white collar worker shared passionately.

Shopee, Huong's favorite online shopping platform, is one of several e-commerce players operating in Vietnam invested by Chinese companies. Though entering the local market just a few years ago, they have wowed local users with unrivalled experiences, and injected tremendous momentum into local e-commerce market.

"Some years ago, Vietnamese people did not have the habit to go online shopping," recalled Huong, "But now many of them do it as a daily hobby, since it is very convenient and the goods' quality is guaranteed by the reputable platforms."

The global social media agency We Are Social found that in 2018, almost 50 million people in Vietnam bought consumer goods online, spending a combined 2.2 billion U.S. dollars, up almost 30 percent compared to 2017.     According to a report revealed by Vietnam E-commerce Association, the average annual growth rate of Vietnam's e-commerce market during 2017 and 2019 is 25 percent to 30 percent.

Such foreign e-commerce players as Lazada and Shopee, and local Tiki, which have received investments from China's e-commerce giants like Alibaba, Tencent and JD.com, are reportedly dominating the market with impressive growth.

According to the online shopping aggregator Iprice's e-commerce ranking, in the third quarter of this year, Shopee held lead in web traffic with nearly 34.6 million visits per month, Tiki ranked fourth with more than 27.1 million visits and Lazada placed fifth with nearly 24.4 million.

"These retailers offer so many choices at reasonable prices, not to mention their brilliant and entertaining promotion campaigns, which give customers something to look forward to every month, every week, even every day," Huong noted, adding that the Double Eleven has become the most expected shopping festival throughout the year since it was launched in 2016.

For this year's Double Eleven, Lazada has announced their programs with participation of hundreds of thousands of sellers who will offer discounted prices. It has also launched a serious of games and initiatives to better customers' experience and reward them with the promotion rewards.

On the other hand, Shopee kicked off the year-end shopping season with big sale days earlier on Sept. 9 and Oct. 10, saying that it had spent months preparing for Double Eleven, the peak of this exciting period, from curating the very best deals with sellers and brands to optimizing delivery processes with logistics partners.

Explaining the popularity of Double Eleven in Vietnam, Nguyen Van Dung, a 32-year-old seller with an online shop on Lazada, said that Vietnamese buyers have a strong tendency to save money, therefore they usually look for discounts.

"Besides, like people in Asian countries, they often shop a lot by the year-end, especially during the Lunar New Year festival, but there had been no big shopping festival before that, at the end of autumn, to cater their needs," he told Xinhua, noting these are among the reasons why Double Eleven sales quickly become a hot trend in the country.

According to Dung, the event does not only benefits buyers. "It creates a win-win playground for all participants, including sellers and logistics partners who will have more customers and increasing revenue," he explained.

In terms of logistics, Chinese investors have experiences in managing warehouses, operating goods classifications and speeding up delivery. This has helped to shorten waiting time for buyers and make them very satisfied with the convenience, Dung said.

"Super fast and professional delivery, you can even track the whereabouts of your package," Dung said, noting that it also enables cross-border purchasing, for instance from China-based sellers.

Lazada Vietnam has benefited a part of total technology investment and achievement from Alibaba in e-commerce, and has used the top-notch technology to satisfy young and tech-savvy consumers in Vietnam who are seeking for new and convenient experiences, its country's CEO James Dong told local media recently.

According to local experts, backed by the investment and experience of Chinese giant e-commerce groups, the platforms have been benefited notably in terms of advanced technology and successful marketing strategies.

"China has a strongly developed e-commerce market with innovative and advanced technology solutions, while the sector is now quickly emerging in ASEAN markets," Vo Dai Luoc, former head of Hanoi-based Institute of World Economics and Politics under the Vietnam Academy of Social Sciences told Xinhua recently, noting that facilitating cooperation in this field is a good chance for ASEAN countries like Vietnam to learn from China and develop their own systems.

To Huong, the Hanoian female shopper, it is good that customers in Vietnam now have so many choices in their hands thanks to the rapid development of the e-commerce system. "It means better services and more competitive quality of products, and more satisfaction," the young woman said with a bright smile.