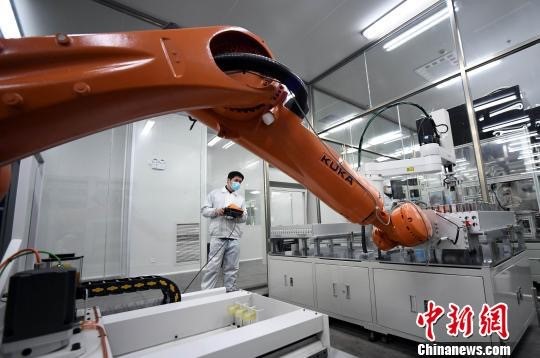 A Chinese enterprise signed an agreement with the Thuringian State government of Germany on July 9 to invest 240 million euros (about $282 million) to build the country's largest lithium battery production plant, China News reported.

According to the agreement, the Chinese vehicle battery manufacturer Contemporary Amperex Technology Limited (CATL) will invest and develop a battery production base as well as an intelligent manufacturing technology research and development center in the state.

The production base will mainly deal with research and development production of lithium batteries. It is set to begin operation in 2021 and achieve a capacity of 14 GWh in 2022, which is expected to offer around 600 local jobs. The base will provide ancillary products for world-renowned automobile enterprises including BMW, Volkswagen, Daimler and Jaguar Land Rover.

Zeng Yuqun, president of CATL, disclosed that the enterprise hopes to bring world-leading power battery technologies to Germany, to better meet the demand of European customers.

CATL’s investment is one of the most important to the state over the past decade. It has great significance not only for CATL itself, but also for the state and the new energy automobile industry of Europe, noted Thuringian Economics Minister Wolfgang Tiefensee.

“We are glad that CATL chose Germany as its investment destination,” said Robert Hermann, CEO of Germany Trade & Invest, adding that Germany has been vigorously promoting development of electric vehicles recently.

CATL’s investment in Germany will not only bring it closer to European electric vehicle manufacturers, but also make it accessible to local superior employees and world-class infrastructure of the country, the CEO noted.

CATL, founded in 2011, focuses on R&D, manufacturing and selling of power batteries and energy storage systems. In 2017, it occupied 17 percent of global power battery market shares, ranking it first in the world. The enterprise has now set up branches in many countries, including Germany, France, the US, Canada and Japan.