BUSINESS China issues $4.4b worth of shopping vouchers to spur consumption

China issues $4.4b worth of shopping vouchers to spur consumption 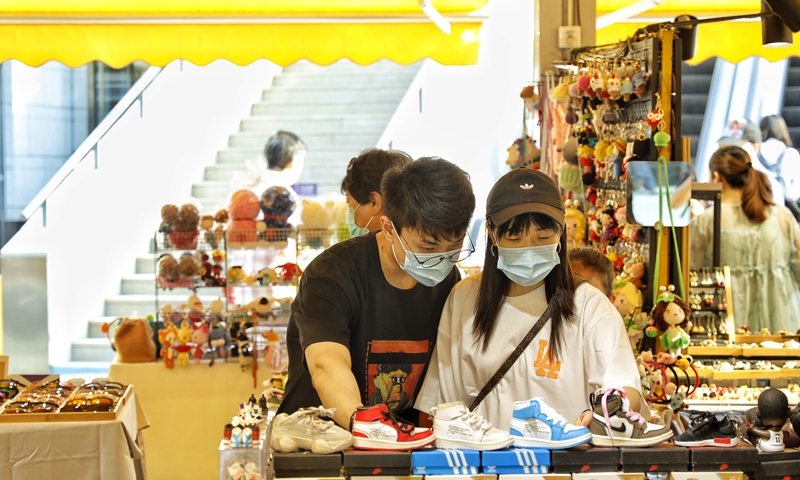 China's capital Beijing has started to issue a total of 12.2 billion yuan ($1.72 billion) worth of shopping vouchers on Saturday, the biggest sum so far, as the country bets on domestic consumption to spur economic growth at a time when exports are impacted by the global pandemic.

Considered an important attempt at innovation, shopping coupons are also expected to play a role in protecting jobs and families' disposable incomes, according to analysts.

On Saturday, Beijing launched a shopping event that lasts until the end of the National Day holiday, during which 12.2 billion worth of shopping vouchers will be issued. The first batch of 3 million vouchers were issued on Saturday on domestic e-commerce platform JD.com.

According to the platform, the vouchers - valid for 14 days - can be used in sectors including catering, shopping, tourism, entertainment, education and sports.

"The amount of coupons Beijing issued is estimated to drive consumption by more than 12.2 billion yuan because there is a threshold of minimum spending for consumers to use the vouchers," Yu Miaojie, deputy dean of the National School of Development at Peking University, told the Global Times on Saturday.

Qu Ling, a resident in Hangzhou, capital of East China's Zhejiang Province, has received the coupons on Alibaba-backed Alipay six times. After getting coupons worth a total of about 400 yuan, she spent about 4,000 yuan so far for dining, repairing her car and buying daily necessities.

"I think issuing coupons is a smart idea because consumers are more willing to spend with some discounts," Qu told the Global Times on Saturday.

Data from the Ministry of Commerce showed that by May 8, governments and enterprises in more than 170 Chinese cities, whether large or small, have issued accumulatively over 19 billion yuan worth of shopping coupons since the COVID-19 outbreak began.

The effect of the move is apparent. By Wednesday, more than 2.74 million coupons issued in hard-hit Wuhan, Central China's Hubei Province were used via WeChat, driving the economic growth of 750 million yuan, or a leverage rate of 11.8, local newspaper Wuhan Evening News reported.

According to the report, most of the vouchers were used in supermarkets, restaurants, convenience stores, shopping malls and fresh groceries, citing WeChat data.

Hua Changchun, chief economist at Guotai Junan Securities, told the Global Times on Saturday that although the issuance of vouchers may not necessarily spur new spending on big-ticket items like TVs and fridges, large-scale issuance is still helpful as it indirectly helps increase families' disposable incomes.

As for the argument that giving cash to families may be more effective, Yu said that people may deposit rather than spend if they receive cash, but consumers tend to use vouchers as discounts once they get them.

A report released by the China Institute of New Economy on Friday showed that the voucher usage rate via WeChat reached 99.6 percent in Central China's Hunan Province and about 84.7 percent by June 1 in Wuhan.

It's worth noting that coupon users aged 50 and above account for 30 percent of the total, Wuhan Evening News said, reflecting the wide coverage of the coupons.

A 59-year-old retired worker surnamed Chang in Beijing told the Global Times on Saturday that he has learned about the shopping coupons from media reports but hasn't got the chance to try them out yet.

Chang said that he is considering collecting some vouchers to buy a new mobile phone to replace the one he has used for seven years.

In addition, low-income families were also given special attention in response to the country's call for increased support for low-income households and destitute families. During the event, a total of 119,000 low-income families in Beijing will receive 400 yuan in special subsidies under the joint assistance of local government and companies.

Dong Dengxin, director of the Finance and Securities Institute at the Wuhan University of Science and Technology, told the Global Times that by giving cash to low-income families and issuing shopping coupons for other households may be a better choice to guarantee that the stimulus can flow into the real economy and effectively drive consumption.

Although China's consumption sector is recovering slightly slower than expected, the country's GDP is still expected to grow by around 3.5 percent this year, according to analysts.

"The GDP growth may be between 3 and 5.3 percent, and 3.5 percent should not be a problem given current economic trends," Yu said, noting that the country's infrastructure and property investment has recovered to almost normality.

China's nominal retail sales dropped 19 percent year-on-year in the first quarter of this year to about 7.86 trillion yuan. However, online shopping surged, alleviating fears of the impact of the COVID-19 outbreak and giving rise to the demand for imported goods.

On June 1, the first day of the largest mid-year "618" shopping festival in China, sales of iPhones on Alibaba-backed Tmall exceeded 500 million yuan within five hours - a record for iPhones on the platform and equivalent to a day's sales in China, according to an Alibaba's data.

Dong said that online shopping will be a highlight of China's economic growth this year, predicting at least 20 percent growth for the sector in the second quarter.