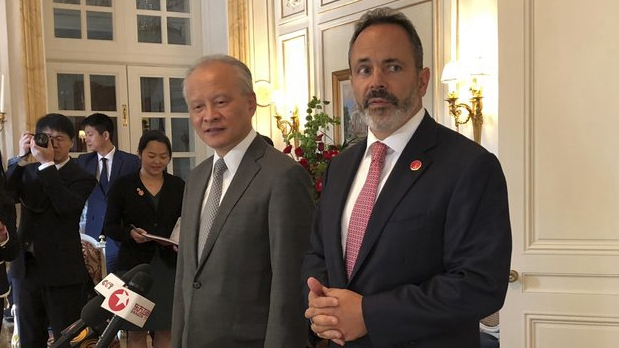 China's business community has a strong interest in investment in the United States in general, and in Kentucky in particular, the Chinese ambassador to the US said during a joint press conference with the state's Republican governor on Monday.

"The job of the government is to try to reduce possible barriers so people can facilitate such economic trade and investment and cultural ties between our two people,” Ambassador Cui Tiankai said.

Cui and Governor Matt Bevin said they focused on economic development opportunities in Kentucky rather than the ongoing tariff dispute between the US and China.

The press conference came after the US announced it will begin imposing new tariffs of 25 percent on 16 billion US dollars' worth of Chinese goods.

China responded by pledging equal duties on the equivalent value of US goods. Both tariffs are set to take effect on August 23.

Bevin said that globalization is something the US should "encourage more of."

He added that tariffs were not discussed much during the meeting and called for more cooperation and investment. He said that "only seven Chinese companies operate in Kentucky, employing about 8,200 workers."

Cui responded that many Chinese know about Kentucky from Kentucky Fried Chicken, a chain of fast food restaurants now known as KFC, but added that the state has more to offer.

"The business community in China has a strong interest in making investments in the United States in general and in Kentucky in particular," Cui said.

"The job of the governments is to try to reduce possible barriers so people could facilitate such economic trade and investment and cultural ties between our two people," he added.

Bevin outlined his expectation to see 200 Chinese companies operating in Kentucky over the next two decades.

He is scheduled to attend the China International Import Expo in Shanghai this November.