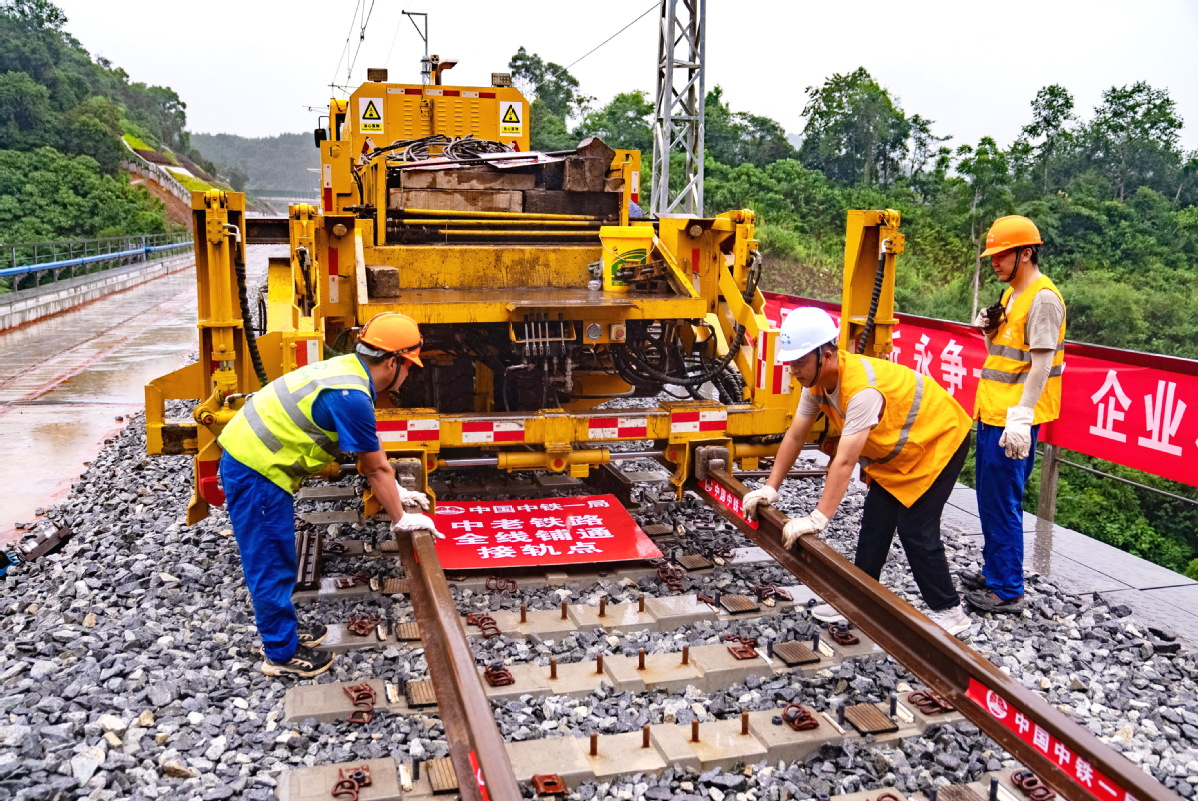 Workers at the construction site of the China-Laos railway. Photo by Wang Yixiang/For China Daily

The anticipated full opening by the end of this year of the China-Laos railway－an important part of the trans-Asian railway network－will significantly stimulate both trade volume and people-to-people exchanges between China and Southeast Asia in the coming years, said its investors and operators on Wednesday.

They made the comments after China Railway Group Ltd, the main contractor for the project, announced on Tuesday that track construction of the 1,024-kilometer railroad, which connects Kunming in Yunnan province with the Lao capital Vientiane, was completed in Mengla county, Xishuangbanna Dai autonomous prefecture. It is near a land port on the China-Laos border.

With a designed speed of 160 kilometers per hour, the cross-border railway service between the two cities is scheduled for launch in December. A train departing Kunming in the morning will arrive in Vientiane in the evening on the same day, according to China State Railway Group Co Ltd, the country's railroad operator.

Travel between Kunming and Vientiane currently takes about 20 hours by road.

As a docking project between the China-proposed Belt and Road Initiative and Laos' strategy to convert itself from a landlocked country to a land-linked hub, the railroad project once again shows that China is capable of building railways in areas with difficult terrain and conditions, said Luo Yin, chairman of Yunnan Provincial Railway Investment Co Ltd, a main investor in the China-Laos railway project.

With construction work launched in 2015, the China-Laos railway is the first international railway to be invested and constructed by China and directly connected with the Chinese railway network after the BRI was proposed in 2013, Luo said, adding that the State-owned company to date has invested 10.67 billion yuan ($1.65 billion) in the big-ticket project.

The whole railroad adopts Chinese railway technical standards and uses Chinese equipment. At present, construction work of the railway roadbed, bridges, tunnels and power-related projects have all been completed, according to the Kunming-based investor.

The railway runs through the Indian-Eurasian plate geological zones, which feature crisscrossing valleys and rivers. There are 167 tunnels along the China-Laos railway. The total length of the tunnels adds up to over 590 km, accounting for 63 percent of the railway's total distance.

Zhang Xinjin, deputy general manager of China Railway's Kunming bureau, said that the China-Laos railway is a scientific and technological marvel, which has accumulated valuable experience regarding railway construction in mountainous regions of China.

Based on the Beidou Navigation Satellite System and infrared scanning technology, the railway's construction control and management is more intelligent than before. It used to take two hours to set up a 500-meter guideline using human labor. But now, things can be done much more quickly, thanks to new technologies independently developed by China, Zhang said.

In addition to boosting bilateral trade and shortening transportation time between China and Laos, the new railroad will better connect Laos with other economies participating in the BRI, as well as generate more jobs and attract global investors to the Southeast Asian nation, said Zhou Zhicheng, a researcher at the Beijing-based China Federation of Logistics and Purchasing.

The future implementation of the Regional Comprehensive Economic Partnership agreement will also assist companies in Laos and other member states of the Association of Southeast Asian Nations to export more goods to China via both railroads and ocean shipping services, he said.

Foreign trade between China and the ASEAN soared 21.1 percent on a yearly basis to 4.08 trillion yuan in the first three quarters, accounting for 14.4 percent of China's total exports and imports during the period, said the General Administration of Customs on Wednesday.