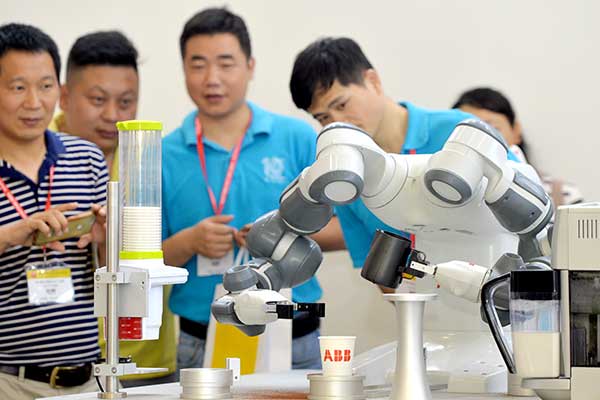 YuMi, a robot produced by ABB, makes coffee for visitors at a fair in Wuhan, Hubei province. (Photo: Zhou Chao for China Daily)

GENEVA - Over the past 17 years since its entry into the World Trade Organization (WTO), China has brought significant opportunities and made great contributions to world economic and trade growth, said a senior Chinese official on Thursday.

Wang Shouwen, China's vice minister of commerce and deputy China international trade representative, made the remarks at a press briefing on a white paper titled China and the World Trade Organization.

The document was released by China's State Council Information Office for the first time on June 28.

"China has during this period become a major engine for world economic recovery and growth, contributing nearly 30 percent on average per year to global economic growth," Wang said.

China's accession to the WTO has brought benefits to all the members, he said.

China is currently the largest trading partner of more than 120 countries and regions, he explained, with its exports providing high-quality goods for companies and people all over the world.

"China has faithfully fulfilled its WTO commitments and strived to integrate into the multilateral trading system," he said.

On trade in goods, China fulfilled all of its tariff reduction commitments in 2010, with its average tariff level down to 9.8 percent from 15.3 percent in 2001.

China had also fulfilled all of its commitments on trade in services by 2007, and opened up 100 sub-sectors under nine sectors.

Since entering the WTO, Wang said, China has been a staunch supporter of the multilateral trading system.

"China has endeavored to liberalize and facilitate trade and investment, safeguarded the dispute settlement mechanism, fully participated in trade policy review, and vigorously supported the integration of developing members into the multilateral trading system," Wang said.

It will substantially widen market access, create a more attractive environment for foreign investment, and encourage sound and rational outward investment, in committing itself to opening up wider and deeper to promote common development across the world, he added.