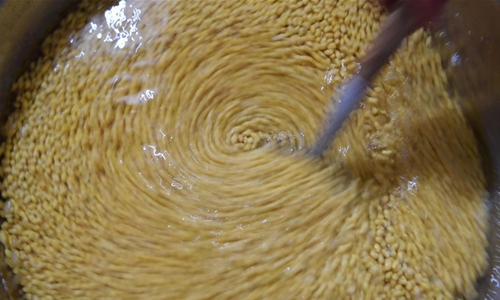 China may expand exports of grains like paddy rice over the coming months to meet global demand, an analyst said, as the UN warned of global food shortages.

With the coronavirus being largely brought under control in China, the country's farming has mostly returned to normal. A farmer surnamed Zhu in Heihe, Northeast China's Heilongjiang Province, a major soybean and corn base, told the Global Times on Sunday that about 85 tons of soybean seeds and 20 tons of corn seeds his farming cooperative needs have arrived and fertilizers have also been promptly shipped to the site.

"We're able to start spring sowing on time - with soybean planting starting on May 1 and corn planting on April 20," Zhu said, noting that spring farming wasn't much affected by the COVID-19 outbreak.

Amid the epidemic, China's exports of grains dropped 27.8 percent year-on-year to 350,000 tons in the first two months of this year, data from the General Administration of Customs showed.

But Ma Wenfeng, a senior analyst at Beijing Orient Agribusiness Consultancy, told the Global Times on Sunday that "China may expand exports of certain grains like paddy rice and wheat to help stabilize global food supply," as some major exporters stockpiled grains to deal with a potential short supply.

Russia, for instance, said on Friday that it proposed setting up a quota for Russian grain exporters of 7 million tons for April to June, while Vietnam, a major world rice exporter, has now suspended rice exports, and major wheat flour source Kazakhstan has banned exports.

Major grain exporting countries' bans may lead to fluctuations of international grain prices, but that will have a slight impact on China's grain market while helping relieve inventory pressure of certain grain categories domestically, according to Wang Liaowei, senior economist at China National Grain and Oils Information Center, which is under China's Food and Strategic Reserves Administration.

Meanwhile, China's output of paddy rice and wheat has exceeded market demand for many years. Wang calculated that the country's paddy rice output had a surplus of 14.3 million tons and wheat more than 14 million tons in 2019, according to an article posted on the center's website.