China's purchasing managers' index (PMI) bounced back to 53 in March, bolstering the country's confidence to ramp up efforts to achieve this year's economic and social development goals, though some economists said that a GDP growth rate of 5 percent for the year is acceptable. 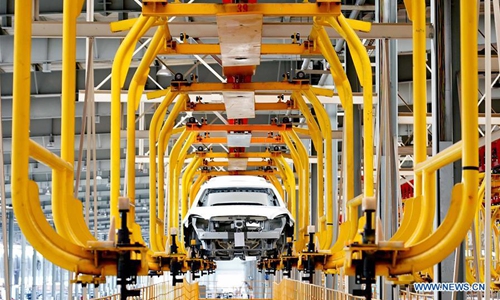 On Tuesday, data from the National Bureau of Statistics (NBS) showed that China's manufacturing PMI for March recovered to expansion territory at 52, after slumping to a record low of 35.7 in February as the COVID-19 epidemic rattled the country's businesses and production.

Although it's a month-on-month gauge, the index shows that Chinese enterprises' operations have improved along with calls to steadily resume economic activity across the country.

As of March 25, among the enterprises polled for the index, large and medium-scale companies reported a business resumption rate of 96.6 percent, up 17.7 percentage points from February.

The worsening global pandemic and increasing imported cases pose a major risk for China's economic growth because the situation limits exports and may exert shocks on domestic industrial chains. But economists are confident that China can achieve this year's development goals.

"China may still set a goal for GDP growth for 2020, but it may be a reasonable range, considering the impact of the COVID-19," Cao Heping, an economist at Peking University, told the Global Times on Tuesday, noting that "5 to 5.5 percent GDP growth is acceptable."

A meeting of the Political Bureau of the Communist Party of China (CPC) Central Committee held on Friday stressed the damages caused by the epidemic should be held to a minimum, urging efforts to achieve this year's economic and social development goals and tasks including building a moderately prosperous society in all aspects and eradicating poverty.

At this time, domestic consumption and investment are expected to become the major drivers of China's economic growth, Gao Lingyun, an expert at the Chinese Academy of Social Sciences who advises the Chinese government on trade issues, told the Global Times on Tuesday.

"It's increasingly necessary to spur domestic consumption, as many people dare not go out and spend amid rising cases of imported infections," Gao said, adding that the country's consumption may start to rebound in the third quarter.

Compared with the US' unlimited quantitative easing (QE) and sending checks to residents and the EU's 1.1 trillion euros ($1.21 trillion) in liquidity, China's response to the fallout of the COVID-19 pandemic is restrained.

"We have a systemic advantage as well as huge consumption potential and talent resources to enable China to be more economically resilient and strive to achieve its targets," Gao said.

The Friday meeting said a package of macroeconomic policies and measures will be introduced, including raising the fiscal deficit ratio and increasing the scale of special-purpose bonds for local governments.

Ming Ming, chief macroeconomic and fixed-income analyst at CITIC Securities, predicted in a note that China's stimulus package may reach 10.7 trillion yuan ($1.5 trillion), or about 10.8 percent of GDP in 2019.