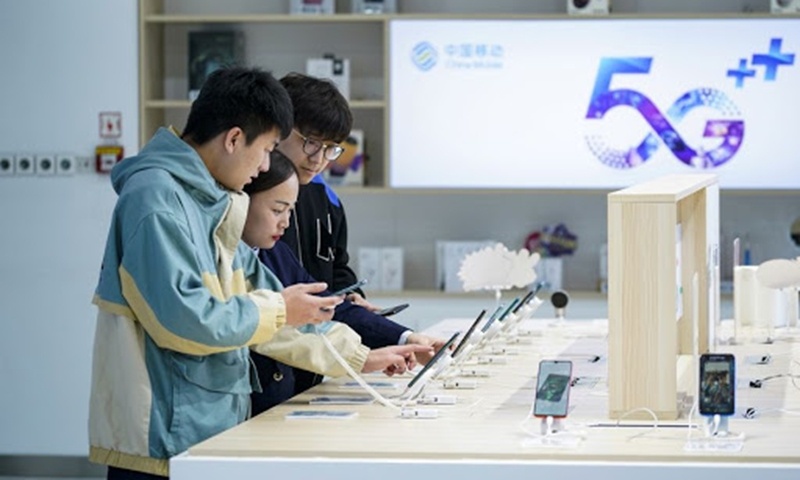 Following in the steps of China Telecom, another Chinese state-owned telecom behemoth, China Mobile, is set to list on the Shanghai Stock Exchange soon, in what would be the biggest IPO for the A-share market in nearly 10 years.

Experts said that more US-listed Chinese companies are expected to turn homeward to raise capital, while letting domestic investors share their growth, amid the US' continued push for "decoupling" that extends from technology to the financial sector.

China Mobile announced on Wednesday night that the China Securities Regulatory Commission (CSRC) had accepted the company's IPO application. The company aims to issue no more than 965 million shares in Shanghai to raise around 56 billion yuan ($8.62 billion), according to the prospectus.

That would exceed the 47.1 billion yuan to be raised by peer China Telecom and become the largest IPO in the A-share market in nearly 10 years, the deep pool of local capital that telecom giants are able to access.

China Telecom announced on Wednesday that it will be listed in Shanghai on Friday, while another major telecommunications company - China Unicom - has been trading in the A-share market for years.

In January, the New York Stock Exchange delisted the three largest Chinese telecommunications companies under an executive order signed by former US President Donald Trump before he left the White House.

The presence of the three telecom giants in the domestic stock market will help them tap huge funding to expand businesses like 5G amid the country's digital transformation, Ma Jihua, a telecommunications industry veteran analyst, told the Global Times, noting that the companies' market value will be reassessed.

Due to the US' persistent crackdown, the telecom giants' shares in New York were undervalued, with their price-to-earnings ratios lower than those of internet firms and manufacturing companies, Ma said.

The CSRC on August 1 urged communications with the US side on the supervision of US-listed Chinese firms in a spirit of mutual respect and win-win cooperation, to seek solutions and foster policy predictability within an institutional environment.

Amid mounting policy uncertainties in the US, more US-listed Chinese companies may accelerate their return home, experts said, noting that Chinese investors' deep pockets and improved capital infrastructure are giving the trend a leg up.

The launch of the registration-based Shanghai STAR market is making the A-market more attractive for Chinese firms, especially cash-hungry tech and innovation start-ups, Xiang Ligang, director general of the Beijing-based Information Consumption Alliance, told the Global Times, noting that by getting listed in China, a vast number of domestic investors could participate in their growth.

As of May 5, there were 248 Chinese companies listed on US exchanges with a total market capitalization of $2.1 trillion, according to data released by the US-China Economic and Security Review Commission.