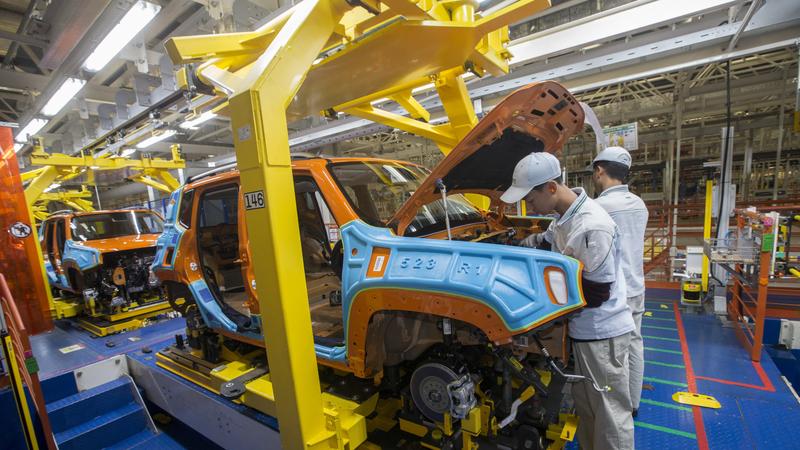 In this undated photo, technicians work at an automobile plant in Guangzhou, capital of Guangdong Province. (File photo: China Daily)

China's growth is forecast to ease to 5.9 percent this year, the World Bank says in its January 2020 Global Economic Prospects Report.

According to the World Bank's semi-annual flagship publication on the state of the world economy, growth among advanced economies as a group is anticipated to slip to 1.4 percent in 2020 in part due to continued softness in manufacturing, while growth in emerging markets and developing economies is expected to accelerate this year to 4.1 percent. However, the rebound depends on the improved performance of a small group of large economies.

These developments reflect continued domestic and external headwinds, including the lingering impact of trade tensions, despite the phase one agreement between China and the US.

"The slowdown we anticipate for China is very much in line with government policies. And it is a slowdown toward a more sustainable growth rate," Franziska Ohnsorge, manager of World Bank Development Prospects Group and a lead author of the report, told the Global Times.

Ohnsorge pointed out that although the debt buildup presents a risk, the authorities are trying to rein in the risk from financial sector vulnerabilities. "They have a lot of buffers to use because they have a lot of reserves and manageable government debt. The risk of capital flight is also less in a Chinese system than elsewhere," she added.

The outlook is predicated on no renewed escalation of trade tensions between China and the US and a gradual stabilization in global trade. It also assumes that authorities in China continue to implement monetary and fiscal policies to offset the negative impact of weakening exports.

"With growth in emerging and developing economies likely to remain slow, policymakers should seize the opportunity to undertake structural reforms that boost broad-based growth, which is essential for poverty reduction," said Ceyla Pazarbasioglu, World Bank Group vice president for equitable growth, finance and institutions. "Steps to improve the business climate, the rule of law, debt management, and productivity can help achieve sustained growth."

The report reveals that global economic growth is forecast to edge up from 2.4 percent in 2019 to 2.5 percent in 2020 as investment and trade gradually recover, but downward risks persist. It also says that the debt buildup since 2010 in emerging and developing economies has seen the largest, fastest, and most broad-based increase in debt in the last 50 years.

"Low global interest rates provide only a precarious protection against financial crises," said World Bank Prospects Group director Ayhan Kose. "The history of past waves of debt accumulation shows that these waves tend to have unhappy endings. In a fragile global environment, policy improvements are critical to minimize the risks associated with the current debt wave," Kose warned.

Analytical sections in the report address other key current topics, including how to rekindle productivity growth, price controls, and inflation in low-income countries.