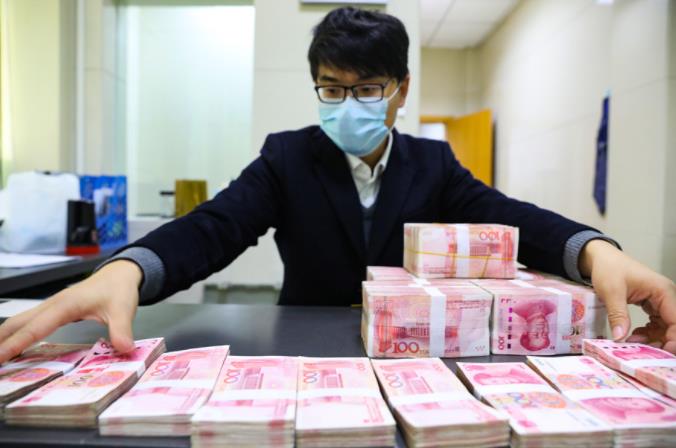 China may opt to cut the benchmark one-year deposit rate, the first time it would do so in four years, to reduce the cost of funds for coronavirus-hit companies, especially if the upcoming economic indicators for January and February hurt market sentiment and increase concerns for policymakers, analysts said on Monday.

Cutting the one-year deposit rate, which is currently at 1.5 percent and unchanged since 2015, could be a further step by the People's Bank of China, the central bank, to boost credit and speed up resumption of business operations amid the novel coronavirus epidemic.

Major economic indicators, including industrial output and fixed-asset investment data, will be announced next Monday. It will be the first set of official data that will gauge the broad economic impact after the virus outbreak.

The central bank will make appropriate adjustments onto the benchmark rate in due time, based on the economic growth fundamentals and price levels, PBOC Vice-Governor Liu Guoqiang said on Feb 22.

The US Federal Reserve's emergency decision to reduce policy interest rates by half a percentage point last week, and possible subsequent cuts, can "broaden the space" for the Chinese central bank to further lower interest rates, for both lending and deposit, although the PBOC has not followed the US move immediately, said Ming Ming, an economist with CITIC Securities.

The market, amid fears of the outbreak spreading all over the world, expected the Fed to continually cut rates to cushion the economic blow. The next cut may come later this month after the Federal Open Market Committee's regular meeting, said analysts.

In a research note, global ratings agency Standard & Poor's Global said: "Given that monetary policy works with a lag, cutting rates now will help speed up recovery when the coronavirus concerns have passed. If the rout in the financial market continues, more rate cuts are likely to follow."

The PBOC has skipped open market operations for 14 consecutive trading days since Feb 18, as it recognized liquidity in the banking sector is at a reasonably ample level. The seven-day reverse repo rate, a major interest rate in the money market, has remained unchanged at 2.4 percent since the PBOC cut it only by 10 basis points in late February.

The benchmark lending rate－the one-year loan prime rate－has been reduced by 26 basis points since August 2019 to 4.05 percent on Feb 20. In the meantime, the decrease in deposits has pushed up the deposit rate and squeezed profits earned by commercial banks from interest rate spreads.

Due to the coronavirus outbreak, recession risks for the global economy are rising, and weak demand will put more pressure on China's economy. Effects of lowering the lending rate will be limited, which will push commercial banks to reduce costs by cutting the deposit rate, said Zhou Junzhi, a macroeconomic analyst with GF Securities.

The deposit rate cut, if rolled out, would not be large, as space is limited after the monetary easing cycle between the years 2014 and 2016, and it is hard for small and medium-sized enterprises to benefit from the deposit rate cut, according to a research note from Nomura Securities.

Monetary authorities have showed caution on stimulus since the outbreak, as they wanted to monitor the inflation and leverage level, and prefer the option to utilize conventional measures. PBOC officials believe that once the rate approaches zero, the monetary policy measures will be less efficient and passive.

The central bank reaffirmed subsequently that it would not issue any "short-term stimulus" measures to boost the property sector, as an engine to boost economic growth. Analysts said the PBOC action showed its concern about excessive easing, which may cause high debt levels, such as the side-effects of the massive stimulus after the 2008 global financial crisis.

"The deposit rate cut is necessary to prevent sudden drops of broad credit in February and March－a possible consequence of the virus. But effects would be limited without taking stronger fiscal policies," said Zhang Bin, a senior researcher of the Institute of World Economics and Politics at the Chinese Academy of Social Sciences, who suggested the central government could directly issue special bonds to contain the virus.

So far, the government has focused on targeted measures, including tax cuts for SMEs, reductions in companies' social security payments, and deferring loan principal and interest payments for small businesses affected by the outbreak.