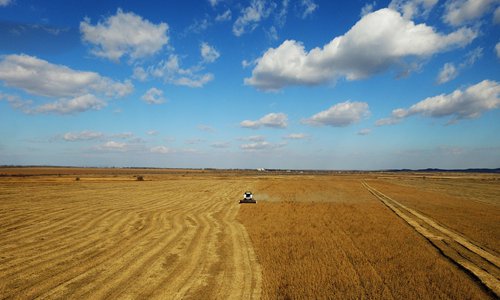 A combine harvester collects soybeans in the village of Khorol, Russia. (Photo: VCG)

Chinese companies are rushing to expand import channels as the nation's trade relationship with the US, which it has relied heavily upon for the imports of certain farm products, teeters on the edge.

China took efforts to expand its import channels long before the trade war began, but the trade war has made the need more urgent, especially in terms of soybean imports, an agricultural expert told the Global Times on Tuesday.

Domestic companies halted purchases of US agricultural products after the US escalated the trade war by imposing fresh tariffs on Chinese goods, Ministry of Foreign Affairs spokesperson Hua Chunying said on Tuesday.

US President Donald Trump said Thursday that he will impose 10 percent tariffs on another $300 billion worth of Chinese goods, effective on September 1.

"China hopes that the US can well implement the consensus the two countries reached during the G20 meeting in Osaka, keep its promises and create the necessary conditions for the two countries' agricultural cooperation," Hua said.

Bai Ming, a deputy director of the International Market Research Institute of the Chinese Ministry of Commerce, said that the US has again sent an "adverse signal" to the China-US trade talks.

"China has shown an active attitude with the recent move to buy US farm goods, but the US also needs to show a positive attitude. But it hasn't, if you consider its recent tariff-hike threats. What it did thwarted the proceedings of the trade negotiations," Bai told the Global Times.

The Xinhua News Agency also published a commentary, noting that the US should be responsible for Chinese companies' decision to halt buying US farm goods.

"The US has repeatedly broken its promises, which will hurt other countries and the US itself in the end," the commentary noted.

Trade in farm products like soybeans has been a core issue in the trade negotiations. Recently, many Chinese companies were in the process of making new purchases of US agricultural products such as soybeans, cotton and pork. Several deals had been reached already, Ministry of Commerce spokesperson Gao Feng disclosed on August 1.

The Xinhua commentary noted that 2.27 million tons of US soybeans were shipped from the US to China between the Osaka meeting and the end of July.

Jiao Shanwei, editor-in-chief of cngrain.com, a website specializing in grain news, said that in recent years China has sought to broaden agricultural import channels to reduce overdependence on certain countries, and the trade war accelerated this process as "China was compelled to find alternative trading partners within a short period of time."

To cope with the situation, China has turned to new soybean trading partners like Russia. Data provided by customs officials in Nanjing, capital of East China's Jiangsu Province, showed that some 4,431.6 tons of Russian soybeans were cleared by Chinese customs after inspection and quarantine on Monday, the first batch of Russian soybeans entering China since Beijing approved soybean imports from all parts of Russia in late July.

He also noted that China used to import about 90 percent of its corn from the US. But now the bulk of corn imports is coming from countries like Ukraine.

The spread of the Belt and Road Initiative (BRI) also helps broaden the import network of domestic companies.

Liu Dongmeng, vice-general manager of Aiju Grain and Oil Industry Group, told the Global Times on Tuesday that the company has imported a total of 75,000 tons of wheat and more than 25,000 tons of edible oil from Kazakhstan over the past two years. The company transported all these imports through China-Europe freight trains.

"Our company saw significant growth in edible oil imports from Kazakhstan over the past two years," Liu noted.

"As China improves its customs clearance procedures, edible oil imports from BRI markets are set to increase further," he said, adding that his company may also expand the categories of farm imports from other countries and regions along the BRI routes.