China and New Zealand on Monday welcomed the conclusion of the negotiations to upgrade the bilateral Free Trade Agreement (FTA), and pledged to expand cooperation in various fields. 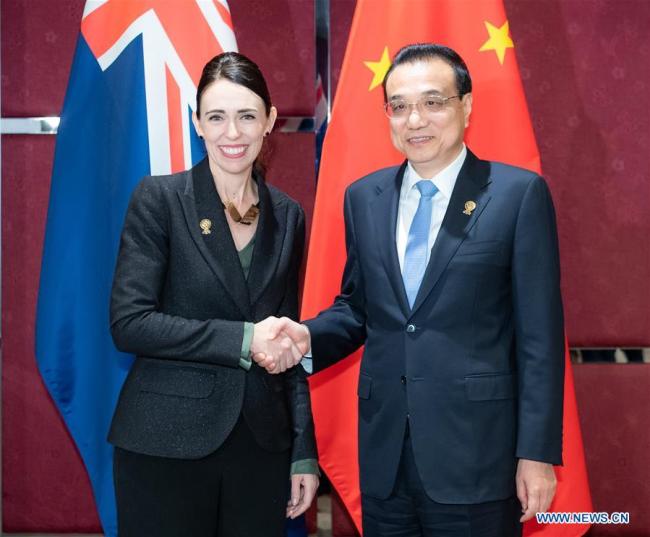 The pledges were made during a meeting between Chinese Premier Li Keqiang and New Zealand Prime Minister Jacinda Ardern on the sidelines of a series of leaders' meetings on East Asian cooperation.

During the meeting, Li said China and New Zealand enjoy close cooperation despite long distance between the two. China was pleased to see the conclusion of the negotiations to upgrade the bilateral FTA with New Zealand, which has sent a strong signal to the world that the two countries are supporting free trade with concrete actions, he said.

Joint efforts are needed from all sides, including China and New Zealand, to address the growing uncertainties on the global horizon and mounting downward pressure on the world economy, he added.

China is willing to join hands with New Zealand to respect each other's core interests and major concerns on the basis of treating each other equally and seeking common ground while reserving differences, expand communication and cooperation with New Zealand in various fields, so as to promote the healthy and stable development of bilateral ties, said the Chinese premier.

China is committed to creating a world-class business environment established on market principles and the rule of law, and hopes that New Zealand would create an environment of fair competition for Chinese businesses investing in the country, said Li.

Noting that the China-New Zealand Year of Tourism was welcomed by people from both sides, Li called for enhanced people-to-people exchanges in such areas as tourism, culture and education.

For her part, Ardern said New Zealand attaches great importance to the comprehensive strategic partnership with China, and adheres to the one-China policy.

She congratulated China on the considerable improvement of its global ranking in the ease of doing business.

Ardern said New Zealand firmly supports the multilateral trading system with the World Trade Organization at the core, adding that the conclusion of negotiations to upgrade the bilateral FTA with China would bring more opportunities for mutually beneficial cooperations.

She said her country is ready to offer a non-discriminative environment for enterprises from all countries doing business in New Zealand.

New Zealand and China have maintained close communication and coordination in addressing climate change, which demonstrates the depth and breadth of the bilateral ties, she said.

New Zealand appreciates China's contribution to the development of Pacific Island countries, and is willing to strengthen three-side cooperation with China in the region, she added.

After the meeting, the two sides issued a joint press statement announcing the conclusion of the negotiations to upgrade the FTA.