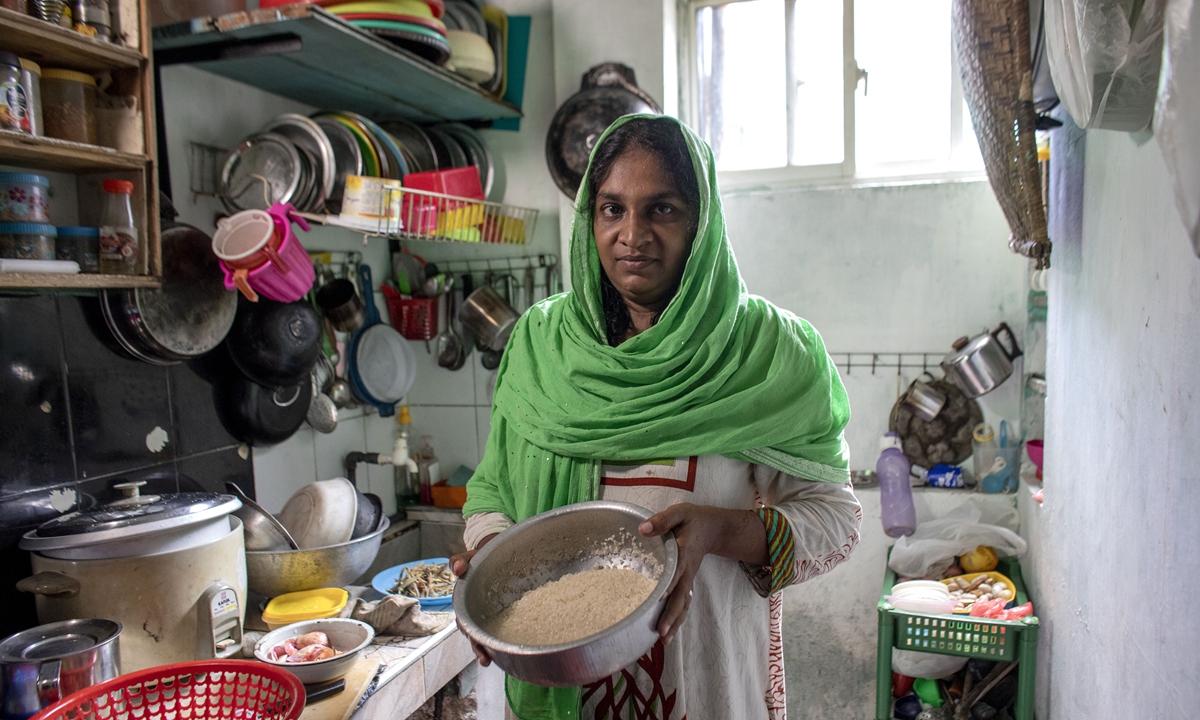 Muniwara Hameed, 39, is a former school meal caterer who has had her life turned upside down in the wake of the economic crisis affecting Sri Lanka. (Photo: Courtesy of WFP)

China's efforts in ensuring food security for its citizens and lessons in agricultural production and protection of the most vulnerable people are really important for other countries in Asia, an official from the United Nations World Food Programme (WFP) told the Global Times on Thursday, while warning that a food crisis in Sri Lanka may expand to more countries in the region.

"What we see in Sri Lanka at the moment is that people have started eating less for each meal, they started skipping some meals…so sometimes the mother will first feed her children and the rest of the family and have very little left for herself…" Anthea Webb, the Deputy Regional Director for the Asia and Pacific Region of the United Nations World Food Programme, told the Global Times during an exclusive video interview.

According to Webb, the WFP has already started its first distribution of supermarket vouchers for pregnant women living in the poorest parts of Colombo. "That's the fastest way for us to help them deal with a 57 percent rise in the cost of food. We will work with communities distributing emergency food and vouchers so that they do not slip even further into poverty," said Webb.

Webb noted that the issue in Sri Lanka is built on some quite specific factors, while the WFP is now concerned about other Asian countries as well, warning that "Sri Lanka may be the first of a number of countries facing difficulties."

"Countries which rely heavily on imported food, which have high debt ratios and whose economy was linked to Ukraine or Russia are most at risk," Webb explained.

Russia and Ukraine are significant producers and exporters of several commodities, including wheat, corn, sunflower oil and fertilizer. Russia is also one of the world's largest fertilizer exporters.

Moreover, Webb said the challenge with food is that it follows the cycle of nature, with no quick solutions at the moment. "You can't just plant more rice or wheat today and expect to have a harvest big enough to cover the shortfall in time for when you need it."

"Changes take time because we rely on the seasons and because they rely on fertilizer and seeds that are also very expensive at the moment," Webb said.

Noting that the food crisis is a global problem that everyone is suffering to some extent, Webb also called for all countries and all people to "find it in their hearts to be generous, and try to make sure that their families and communities are meeting their basic needs."

Commenting on China's efforts in ensuring food security for its 1.4 billion people amid fears of a potential global food crisis, Webb called it "a sign of determination to ensure that all of its people have access to a healthy diet."

"The rest of the world would be much worse off if that were not the case," Webb said. "I know that if China were to turn to world markets even more, then we would certainly see much higher prices than we are today. So that's really, really important."

China has taken a series of both long-term and short-term measures to ensure food security, with an early agro-layout, a well-established national reserve system, and a top-to-bottom emergency mechanism. Chinese officials and industry players have guaranteed an absolute security of staples, with only 9 percent of the world's arable land.

"The lessons that China has generated in terms of what works for agricultural production, for systems that protect the most vulnerable people, are really important for the rest of this region to learn from," Webb said.