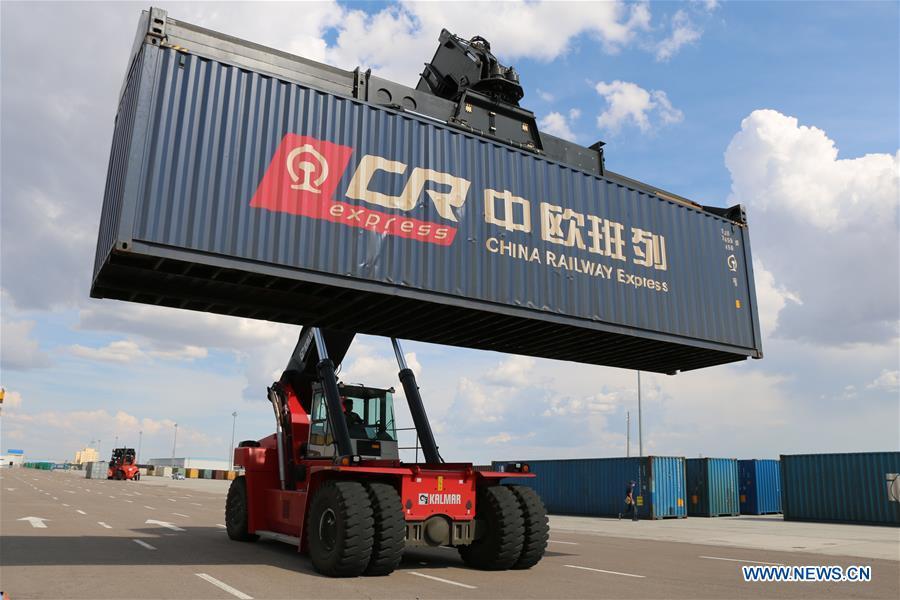 A reach stacker handles cargo containers at the Manzhouli Railway Station in Manzhouli, North China's Inner Mongolia autonomous region, on July 1, 2020. A record 12,406 China-Europe freight train trips were made in 2020, up 50 percent from the previous year, according to China's National Development and Reform Commission. (Photo: Xinhua)

China overtook the United States last year as the European Union's biggest trading partner, according to the EU statistics agency Eurostat on Monday.

The EU saw an increase in both imports and exports with China, with trade volume reaching 586 billion euros ($706 billion) in 2020. The bloc imported 383.5 billion euros of goods from China, up 5.6 percent year-on-year; while its exports to China reached 202.5 billion euros, a yearly increase of 2.2 percent.

At the same time, the EU's trade with the United States recorded a significant drop in both imports (-13.2 percent) and exports (-8.2 percent) to 202 billion euros and 353 billion euros, respectively, said Eurostat.

China's rapid recovery from the coronavirus pandemic boosted its consumption, which helped drive sales of European products, particularly in the automobile and luxury goods sectors, Agence France-Presse (AFP) reported on Monday. And China's exports to Europe benefited from strong demand for medical equipment and electronics.

The investment deal that China and the EU are seeking to ratify would also give European companies better access to the Chinese market, AFP said.