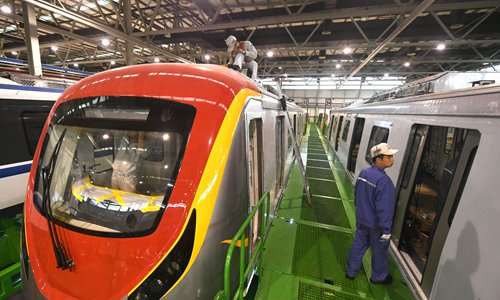 China and Pakistan have signed an upgraded free trade agreement (FTA), as the two close neighbors seek to further strengthen their bilateral economic and trade ties and deepen cooperation under the China-Pakistan Economic Corridor (CPEC), a flagship project of the Belt and Road Initiative (BRI).The second phase of the China-Pakistan FTA, signed during Pakistani Prime Minister Imran Khan's visit to Beijing, also highlighted China's continued efforts to open up its market and expand BRI cooperation into more areas, analysts said.Following a bilateral meeting, Khan and Chinese Premier Li Keqiang oversaw the signing of the FTA, which would result in zero tariffs on more products and large cuts to duties on other products, according to a statement from the Chinese Ministry of Commerce (MOFCOM).Under the FTA, the two countries will gradually liberalize 75 percent of their total tariff lines compared with 35 percent in the previous version and cut duties on certain goods such as leather, clothes and seafood from Pakistan, the MOFCOM said. Upgrades and revisions were also made to sections dealing with market access, investment, customs and other areas, it noted."This will no doubt help boost trade between China and Pakistan," said Liu Ying, a research fellow with the Chongyang Institute for Financial Studies at Renmin University of China in Beijing, adding that Pakistan has huge potential in developing trade as it, with the CPEC, would be at the center of a massive flow of global commodities fueled by the BRI.   Trade between China and Pakistan reached $19.08 billion in 2018, with Pakistani exports to China increasing 18.7 percent year-on-year to $2.17 billion, Chinese official data showed. Trade in 2018 was 3.6 times that of 2006, before the original China-Pakistan FTA was signed.Larger meaning"This is a very significant move not just for the two countries but also for the BRI and global trade," said Liu. She pointed out that the FTA also offers a great example of how BRI countries should pursue free trade and high-quality growth and how China will continue to open up its market for foreign companies, two key themes of the just-concluded Belt and Road Forum for International Cooperation (BRF).The upgraded China-Pakistan FTA "reflects the new pattern of China's active push for comprehensive opening and China's attitude and willingness to resolutely support free trade and economic globalization," an unidentified official with the MOFCOM said in a statement.In a speech at the opening of the BRF on Friday, President Xi Jinping stressed high-quality growth under the BRI and pledged that China will take measures to further open up its massive market at a higher level.Vice Commerce Minister Wang Shouwen announced on Monday that the MOFCOM is taking five measures to follow up on Xi's pledge, including studying the further trimming of the negative list of sectors that are off-limits to foreign companies, drafting regulations to match the new foreign investment law and planning to launch new free trade areas. The MOFCOM, Wang said, will also actively participate in multilateral and bilateral trade negotiations and step up efforts to attract investment.Deepening cooperationChina and Pakistan also signed several other documents on projects under the CPEC, including upgrading the Karachi-Peshawar rail line and establishing the Havelian Dry Port, according to a press release from the Pakistani Embassy in Beijing on Monday.Other deals included a memorandum on implementation of CPEC projects on socioeconomic development, an agreement on economic and technical cooperation and an agreement on the Rashakai Special Economic Zone.The two sides also agreed to further expand cooperation under the CPEC into more areas, said the press release. "The Prime Minister underscored the importance of the CPEC for Pakistan's economy and noted with satisfaction its expansion into new areas of development - including industrial development; livelihood projects; social programs; and agriculture," it said.The CPEC, a multibillion dollar program connecting Northwest China's Xinjiang Uyghur Autonomous Region with the Gwadar Port in Pakistan, has seen steady progress in recent years and brought tangible benefits to the local economy and people, according to Chinese Ambassador to Pakistan Yao Jing.Half of the 22 early-harvest projects under the CPEC have been completed and construction work on the other half is in progress, Yao wrote in an article posted on the website of the Chinese Embassy in Islamabad. "The success of the CPEC tells countries that are participating or will participate in the BRI that the core of the BRI is to find new driving forces for global economic growth by focusing on infrastructure and enhancing all-round connectivity," Liang Haiming, dean of Hainan University's Belt and Road Research Institute, told the Global Times on Monday.