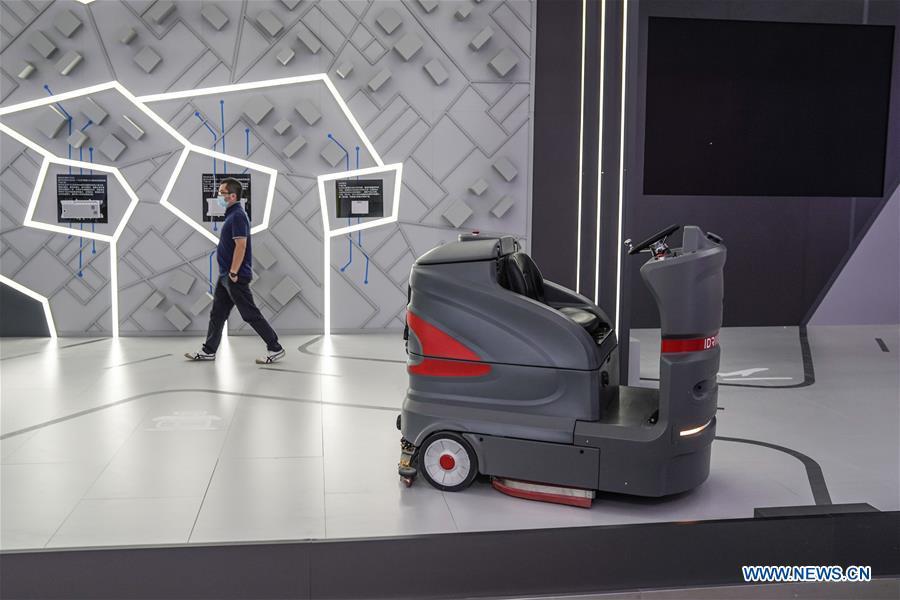 Photo taken on Sept 1, 2020, shows a cleaning robot working in an outdoor exhibition pavilion near the China National Convention Center, where the China International Fair for Trade in Services (CIFTIS) will be held, in Beijing. (Photo: Xinhua)

China will continue to open up its trade in services to the outside world and promote high-quality development of trade in services, despite the challenges brought by the ongoing COVID-19 pandemic, People's Daily reported on Wednesday.

The 2020 China International Fair for Trade in Services (CIFTIS) is expected to be held in Beijing in early September. The opening of such an event under the current circumstances demonstrates China's confidence and determination in further opening-up.

With the theme of "Global Services, Shared Prosperity", the CIFTIS is an open, inclusive and diversified fair, supporting trade liberalization and economic globalization.

As an essential part of international trade, the expansion of trade in service equipped with internet technology can improve the quality and efficiency of China's foreign trade development, injecting momentum into high-quality economic development.

The service trade refers to the sale and delivery of intangible products such as transportation, healthcare, product development, logistics, tourism, telecommunications and entertainment.

Service trade can not only facilitate people's lives but also promote industrial upgrading for domestic companies in relevant fields.

Chinese people's lives have become much more enjoyable as they can watch high-quality movies and art performances near their homes, said Chen Yu, a staff member at a bank in Beijing, after watching several foreign films.

People's expenditures on cultural and entertainment consumption are constantly increasing, as people's living standards are improving and spiritual and cultural needs growing day by day, said He Mi, vice-president of Alibaba Pictures.

Introducing high-quality films and art performances can, on the one hand, increase the supply of the domestic cultural market and better meet consumers' spiritual and cultural needs, and on the other hand, promote market competition and the upgrading of domestic industries, He said.

China's import and export of services have continued to expand in the past years, ranking second in the world for six consecutive years, and consolidating the country's position as a major service trader. The country's import and export of services reached $785 billion in 2019, said Li Jun, director of the Institute of International Trade in Services at the Chinese Academy of International Trade and Economic Cooperation.

The rapid development of trade in services has better satisfied people's yearning for a better life and the development of trade in services is closely related to people's lives. The opening-up of life service industries such as education, tourism and medical care can provide more choices for high-quality services. The trade in productive services such as telecommunications and computers can continuously improve social production efficiency, Li said.

With strong policy support from different levels of government, China's trade in services can also help to optimize growth structure on a large scale, the report said.

Data shows that China's import and export of knowledge-intensive services reached 974.43 billion yuan ($142.66 billion) in the first half of this year, up 9.2 percent year-on-year, accounting for 43.7 percent of the total, up 9.6 percentage points year-on-year.

In the second half of this year, the country will further promote high-quality and efficient development of trade in services, deepen reform and opening-up by accelerating the formulation of a national negative list on cross-border trade in services, and speed up innovation to develop emerging forms of trade in services including digital trade and online exhibitions, according to the Ministry of Commerce.