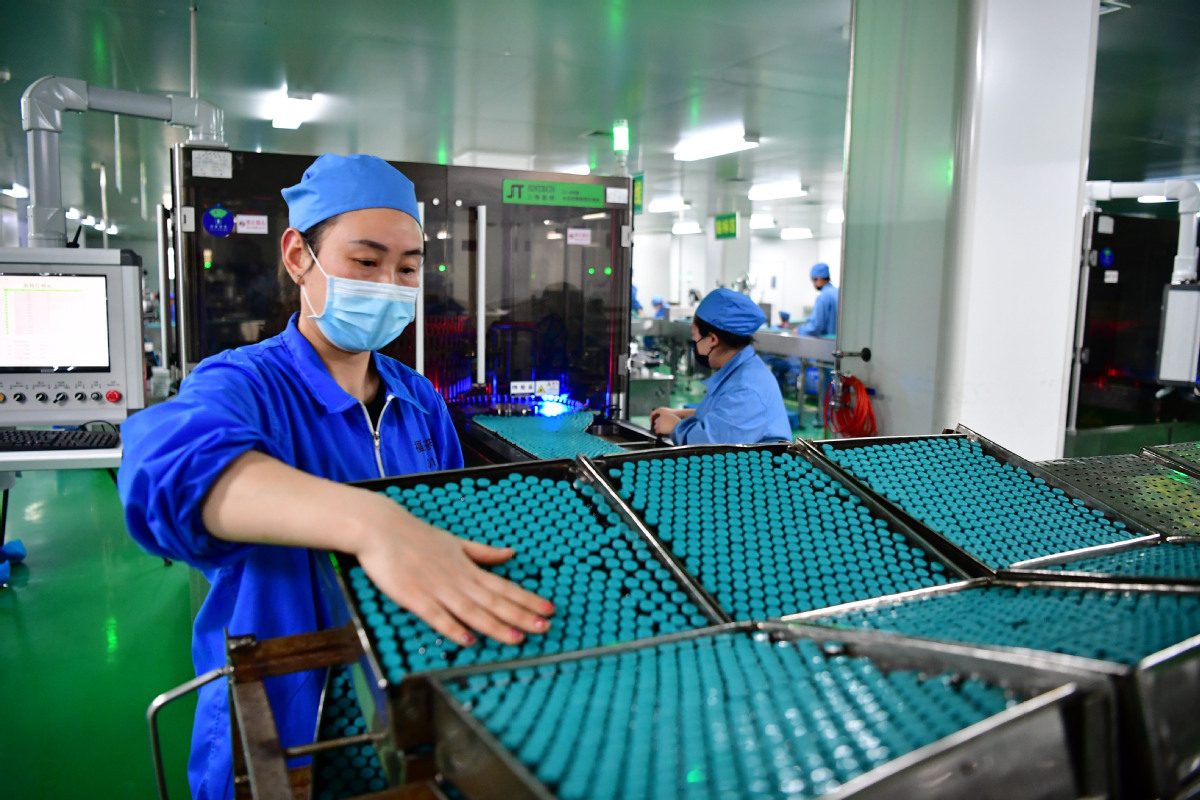 Employees check medicines before they are packed at a pharmaceutical company in Nanyang, Henan province, in February. (Photo: Xinhua)

Cancer drugs in particular a promising undertaking in hyper-competitive space

In 2018, Wu Xiaobin, head of Pfizer China at the time, surprised many in the industry after jumping to BeiGene Ltd, a Chinese biotech startup founded in 2010.

Wu would never regret his choice to become the president of the Chinese biopharmaceutical company that focuses on cancer therapeutics.

"Although China started from almost scratch to establish an industry chain for innovative drugs, it is catching up very fast in related fields such as basic research, clinical trials, factory production, commercialization and quality control," he said.

Listed on both Nasdaq and in Hong Kong, BeiGene has become one of the most respected biotech firms in China.

It received approval from the United States Food and Drug Administration for its independently developed new cancer therapy Brukinsa (zanubrutinib) in November 2019, marking the first-ever such approval for a Chinese anti-cancer drug. The drug treats adult patients with mantle cell lymphoma.

In April, China's National Medical Products Administration approved the company's anti-PD-1 antibody tislelizumab as a treatment for patients with locally advanced or metastatic urothelial carcinoma, the most common type of bladder cancer, following the therapy's initial approval in classic Hodgkin's lymphoma in December 2019.

In July 2020, Brukinsa was approved by the NMPA for two indications-mantle cell lymphoma and chronic lymphocytic leukemia.

Yet, the company is just one among several Chinese pharmaceutical firms making high-profile R&D breakthroughs in new drug development.

After about a month following the FDA approval of zanubrutinib, Hebei province-based CSPC Pharmaceutical Group Ltd also got a nod from the agency for its Conjupri (levamlodipine maleate) tablets to treat high blood pressure.

In fact, Chinese pharmaceutical companies have been on the rise in conducting world-class research and development of cutting-edge treatments during the 13th Five-Year Plan (2016-20) period, especially in innovative drugs and biomedicine.

A recent case is I-Mab Biopharma's out-licensing deal with global drugmaker AbbVie Inc, for the rights of lemzoparlimab, an anti-CD47 monoclonal antibody developed by the Shanghai-based company to treat multiple forms of cancer.

Anti-CD47 therapies are among the most fiercely competitive branches of cancer drug development.

The therapies target for destruction of "don't-eat-me" signals by cancer cells that help them avoid being targeted by the patient's own immune system.

According to the company's announcement on Sept 4, the deal was estimated to be worth more than $2.9 billion.

"Companies in China are in a phase of transition from a more mature product business to an increasingly innovative one," he said.

McKinsey said in a report last year that China's pharmaceutical industry was undertaking a critical transformation toward high-quality and innovation-focused development, reflected by the explosion of new drug and clinical trial approvals in recent years.

Hsmap, a medical innovation and entrepreneurship big data platform based in Hangzhou, Zhejiang province, said in a recent report that in 2016, investigational new drug applications and new drug applications for Class 1 new chemical drugs-or those that have never been marketed in China or overseas-from domestic developers numbered 220 and 5, respectively, while in 2019, the two figures surged to 381 and 19.

From Jan 1 to May 20, INDs and NDAs from domestic companies stood at 183 and 6, respectively, despite of the impact of COVID-19.

Since late 2018, a group of Chinese biotech companies have become among those worldwide to come up with homegrown PD-1/PD-L1 inhibitors. The emerging therapeutics revolutionize cancer treatment as they help the immune system better target and destroy tumors.

Suzhou, Jiangsu province based-CStone Pharmaceuticals has just formed collaboration with Pfizer Investment in September to develop and commercialize its sugemalimab on the Chinese mainland.

The drug is a potential best-in-class PD-L1 antibody that is being developed for high-incidence cancer indications in China, including lung, gastric and esophageal cancers, among others, the company said.

The rise of Chinese pharmaceutical companies is countered by the country's unprecedented drug regulatory reforms, which have propelled innovation momentum across the pharmaceutical industry, industry experts said.

Starting in 2015, China began rolling out a series of documents, regulations and programs in the medical products sector, including reforms in the new drug review and approval system, the generic drug quality and efficacy consistency evaluation and the volume-based tendering policy to shorten the clinical trial process, speed up new drug registrations and encourage innovation.

In 2017, China also became a full member of the International Council for Harmonization of Technical Requirements for Pharmaceuticals for Human Use, an organization that standardizes global drug regulations.

Such reforms also indicate the nation now attaches great importance to drug safety and efficiency, and domestic pharmaceutical companies are spending more on R&D and talent due to greater appreciation for innovation, said Wang Yifu, an analyst with market consultancy iResearch.

In 2019, fixed-asset investment in the domestic pharmaceutical industry-mostly in new drug R&D, generic drug quality and efficacy consistency evaluation and registration in overseas markets-increased 8.4 percent from a year earlier, up 4.4 percentage points from 2018, Wang said.

However, the gap between the domestic pharmaceutical industry and global leaders is still clear, he said.

He suggested China deepen reforms to make better use of market forces and promote high-end capacities while removing outdated ones to optimize the structure of the domestic pharmaceutical industry.