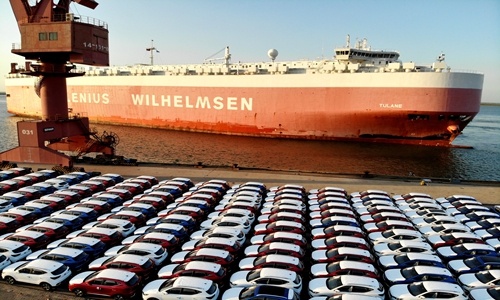 A large ocean rolling ship docked at the Port of Lianyungang in East China's Jiangsu Province on September 3 to load vehicles for export to Belgium. (Photo: cnsphoto)

China is set to advance a new export control law with four new amendments to protect the country's national security.

The Standing Committee of the 13th National People's Congress (NPC), China's top legislature, will review a draft export control law with four major amendments at its 22nd session, which will convene from October 13 to 17 in Beijing.

The draft law calls for advancing China's export control system on the grounds of safeguarding national security and legitimate interests, according to a spokesperson of the legislature.

The scope of items that fall under the export control category will be further clarified in the draft.

The draft also calls on export control administrative departments to issue export control guidelines for relevant industries in a timely manner in order to guide enterprises to establish an internal reporting system for export control.

The draft law is a timely solution for any loopholes in China's regulation as the country's foreign trade expands, Bai Ming, deputy director of the Ministry of Commerce's International Market Research Institute told the Global Times on Monday.

"The draft export control law is a prescribed move as China rises as an international trading power. It's not aimed at any one country, but acts as a backup measure for anyone who is unfair to and discriminates China," Bai said.