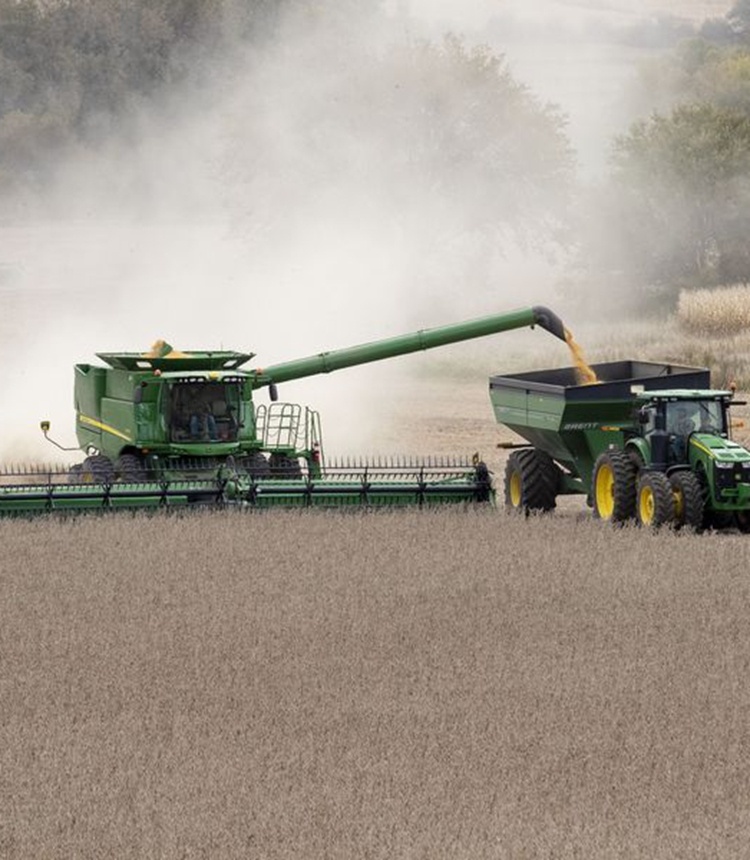 A combine and a grain cart work in a soybean field of Pellett family's farm in Atlantic, a small city in Iowa, the United States, Oct. 16, 2019. (Photo: Xinhua)

In back-to-back meetings with a leading US trade group over the past couple of days, Chinese officials sought to reassure American businesses of Beijing's commitment to implement the phase one trade agreement and promote win-win cooperation, in what experts said was a bid to send a clear signal of China's willingness to improve deteriorating ties before  the US presidential election.

The virtual meetings between Chinese officials from various departments with leaders of the US-China Business Council (USCBC) came at a time when the world's most consequential bilateral relationship has been under serious pressure amid rising hostility from Washington on several fronts amid the heated presidential election campaign. During the meetings, Chinese officials made it clear that China is committed to pursuing cooperation with the US other than confrontation.

On Monday and Tuesday, Chinese officials, including Vice Premier Hu Chunhua, held at least three virtual meetings with leaders of the USCBC. On Tuesday, Hu told the US delegation that a sound, steady China-US economic and trade relationship is in both sides' interests, and China will continue to promote higher level opening-up and provide foreign firms with better services, according to the Xinhua News Agency.

In a separate meeting on Monday night, Ning Jizhe, deputy head of China's National Development and Reform Commission (NDRC), said that since the signing of the phase one trade agreement, relevant Chinese departments have made a lot of effort to expand the implementation of the deal and "positive" progress has been seen in increasing imports from the US, the NDRC said in a statement on Thursday.

"Going forward, China is willing to work with the US to overcome challenges posed by the novel coronavirus epidemic to jointly implement the phase one economic and trade agreement," said Ning, who has also participated in the China-US trade talks.

Despite the COVID-19 pandemic that has seriously disrupted global trade, China's imports from the US grew by 2.8 percent year-on-year in the first three quarter of the year, while exports grew by 1.8 percent, according to Chinese customs data.

Specifically, China's imports of US agricultural goods, which are covered by the phase one deal, grew by 44.4 percent year-on-year during the period.

"I think the message was clear that China is pushing forward the implementation of the phase one agreement despite all the obstacles posed by the COVID-19 pandemic," Wang Jun, an expert at the China Center for International Economic Exchanges in Beijing, told the Global Times on Thursday, noting that it's important to remind the US of that in light of deteriorating bilateral relations.

Since the signing of the phase one deal, which was expected by many to stabilize bilateral ties after the multi-year trade war, China-US relations have been on a downward spiral, as the US waged a campaign against China on multiple fronts from technology to Hong Kong and Xinjiang issues to the COVID-19. Experts have attributed much of the new US aggression to US domestic politics ahead of the US presidential election in early November.

Through the meetings, "the Chinese side wants to send a clear signal that it is willing to improve relations with the US, regardless of who and which party wins the election," Wang said, adding that China's commitment to a win-win relationship won't change.

In addition to the vice premier and the NDRC official, Zhang Gong, head of the State Administration for Market Regulation, also met with the USCBC delegation on Tuesday, where the two sides discussed various issues, including protection of intellectual property and fair competition.

The meetings reflect the value that China puts on the role of the USCBC as an "old friend" who has long been supporting China-US economic and trade cooperation, according to Gao Lingyun, an expert at the Institute of World Economics and Politics under the Chinese Academy of Social Sciences.

"Through the meetings, China is expressing its commitment and proactive work in carrying out the phase one deal to both US parties," Gao told the Global Times on Thursday. "Most importantly, it wants to highlight the win-win nature of China-US cooperation."

During the meeting with Ning, the USCBC delegation noted that most US companies operating in China support the phase one trade deal, and nearly half of them acknowledge the progress China has made, according to the NDRC statement.