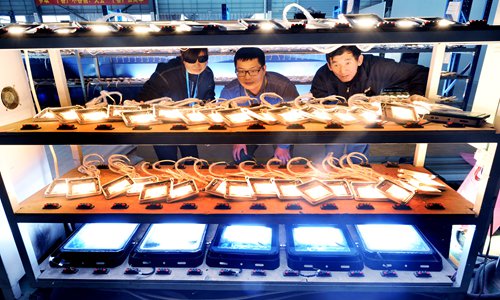 Workers at a private firm produce LED lights ordered by French customers in Shangrao, East China's Jiangxi Provinceon Saturday. Focused on LED products such as lamp belts and cups, the company has taken orders from over 100 countries and regions, realizing output of 800 million yuan ($119.2 million) per year. （Photo: VCG）

The State Council, China's cabinet, unveiled new guidelines on Sunday to give privately run companies greater market access, in a fresh move to energize the nation's private sector amid an economic downturn.

Private companies will be allowed to engage in competitive businesses in key sectors including electricity, telecommunications, railroads, oil and natural gas, under the guidelines that vow to investigate and eliminate apparent and hidden barriers.

The government supports private companies in buying stakes in basic telecom operations and in controlling or purchasing stakes in businesses as regards power generation, distribution and sales.

The government also aims for private businesses to venture into the fields of oil, gas exploration, development, refining and sales, and the building of infrastructure including pipeline transportation, the guidelines said. Qualified companies will be allowed to import crude oil and export petroleum products.

Specific road maps to enable private businesses greater access to these fields and the timeline for the mission to be achieved will be considered and formulated by concerned government departments, according to the announcement, which noted that private companies have played an irreplaceable role in driving innovation, adding jobs, improving living standards and expanding opening-up.

In a sign of private-sector vitality, private companies posted an 8 percent jump in industrial output during the first three quarters of the year, outpacing a 5.6 percent increase for the entire industrial sector, showed data from the Ministry of Industry and Information Technology.

With private businesses gaining wider access to areas that have previously been predominantly run by their state counterparts, the economy is truly honoring its promise to create a level playing field for companies, be they state-owned or privately run, market observers said, anticipating an uptick in business confidence to boost an overall slowing economy.

"It offers wider investment areas for private firms amid a challenging global market and tough period of domestic industrial upgrading," Cong Yi, a professor at Tianjin University of Finance and Economics, told the Global Times on Sunday.

China has set the tone for its economic strategy next year to keep stabilizing growth regardless of external and internal uncertainties, and offering support for private companies is an important step to stabilize investment, Cong noted.

The Chinese economy expanded by 6 percent in the third quarter, official figures show, its slowest rate in nearly three decades.

China has been ramping up efforts to promote marketization and let the market play a decisive role in resource allocation. Further introducing market competition mechanisms to former monopolistic industries and letting private companies enter the market could also boost market vitality, Cong said, noting that it is also in line with China's mixed-ownership reform to combine the advantages of private and state-owned companies.