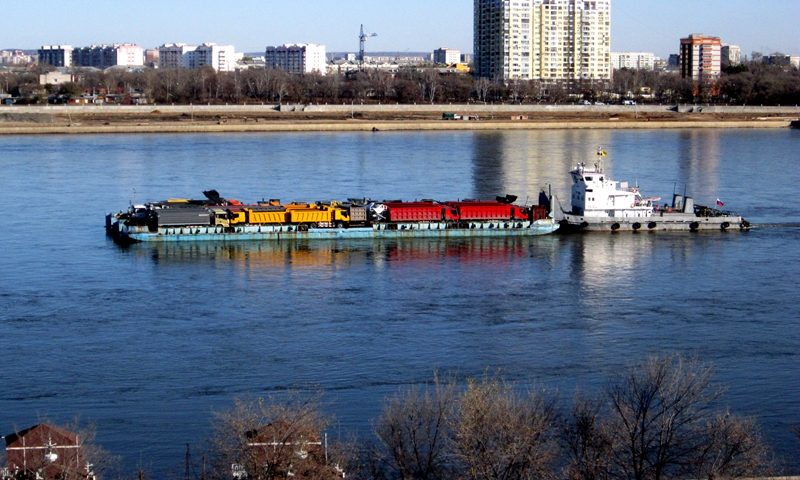 A Russian cargo ship loaded with Chinese machinery and vehicles leaves for the Blagoveshchensk port in Russia from Heihe, Northeast China's Heilongjiang Province on Monday. As the weather turns cold, the Heilong River bordering China and Russia is about to enter the winter closure period, as the lowest temperature in the area has fallen below 0 C, and goods have to leave soon. Photo: VCG

China-Russia energy cooperation is accelerating onto the fast track, with energy accounting for nearly one-third of bilateral trade in the first three quarters of 2021, as leaders from the two countries sent congratulatory letters to a key energy cooperation forum.

Chinese President Xi Jinping and Russian President Vladimir Putin each sent on Monday a congratulatory letter to the 3rd China-Russia Energy Business Forum, held both online and offline in Beijing and Moscow.

Bilateral economic, trade and investment cooperation between China and Russia has become more extensive and deeper, analysts pointed out, noting the progress made during the 3rd China-Russia Energy Business Forum.

Sechin said that the two countries should consider jointly developing and promoting low-carbon technology in the oil and gas industry as well as artificial intelligence.

The event is a business forum jointly sponsored by Chinese oil giant PetroChina and Russian oil major Rosneft, and it aims to promote joint development in the fields of oil and gas, electric power, coal, new energy and energy equipment. At the second edition held in 2019, 18 deals were signed.

"Energy cooperation is the biggest area of cooperation between China and Russia, due to the huge complementarity of the two nations in the energy sector," Lin Boqiang, director of the China Center for Energy Economics Research at Xiamen University, told the Global Times on Monday.

Due to certain advantages, this partnership involving the exchange of market and resources is also expected to last for a long time, as China's demand for Russian oil and gas continues despite its shift toward renewable energy sources, Lin said.

China-Russia energy trade reached $34.9 billion in the first three quarters of this year, accounting for 34.3 percent of total bilateral trade, data from the National Energy Administration of China showed on Monday.

After China's northeastern provinces faced a power crunch in October, the scale of China-Russia power trade will increase sharply from the originally planned 700 million kilowatt hours (kWh) to 1.64 billion kWh in the fourth quarter. For the whole year, electricity imports from Russia are expected to increase by about one-third to reach 4 billion kWh.

The first batch of large-scale equipment for the Xudapu Nuclear Plant in Northeast China's Liaoning Province, a core catcher for the Xudapu Unit 3 reactor supplied by Russia, arrived in Huludao Port in Liaoning after a 90-day sea voyage from St. Petersburg, according to media reports on Monday. The component is a vital piece of safety equipment for the nuclear plant.

The middle (Chinese) section of the China-Russia East-Route Natural Gas Pipeline was completed in 2020 and operations are stable. Gas volume this year is expected to hit about 10 billion cubic meters.