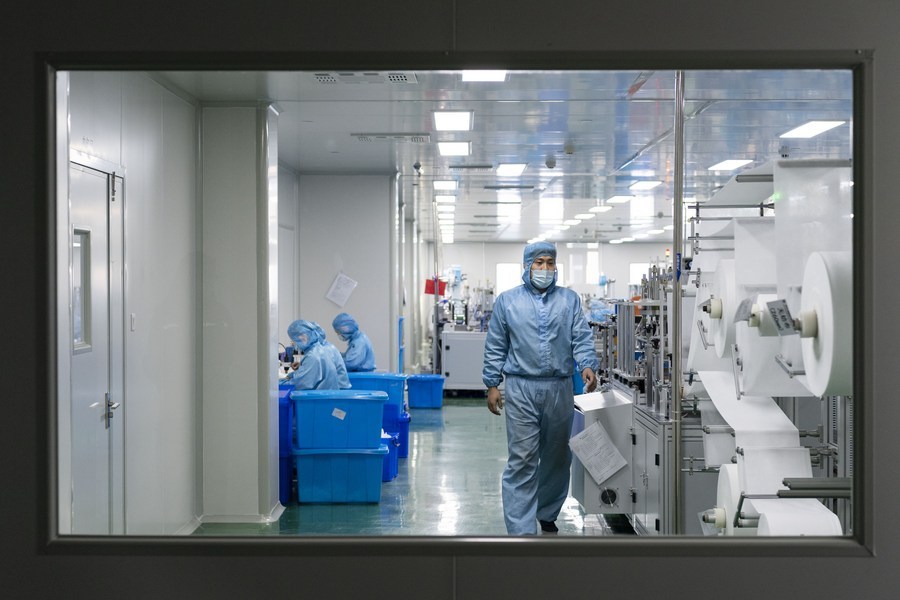 While the central government has been asking both central and local authorities to tighten their belts by reducing general spending, more money was spent in crucial areas, with total expenditure on public health rising 15.2 percent from a year earlier to 1.9 trillion yuan (about 293 billion U.S. dollars).

In particular, the country's direct spending on the fight against COVID-19 surged 74.9 percent, according to the Ministry of Finance (MOF).

This came as the country's total fiscal revenue decreased 3.9 percent year on year to around 18.29 trillion yuan. Fiscal spending expanded 2.8 percent to around 24.56 trillion yuan.

Since the outbreak of the epidemic, China has implemented a slew of new tax and fee relief measures to alleviate the burdens on market entities, particularly on small firms.

In 2020, around 90 percent of over 50 million small firm taxpayers in the country were exempted from value-added tax, while the rest saw their tax rate lowered from 3 percent to 1 percent, said the MOF.

Revenue from individual income tax rose 11.4 percent year on year to 1.16 trillion yuan in the period.

Revenue from value-added tax and consumption tax on imported goods stood at 1.45 trillion yuan, down 8.1 percent from a year earlier, and revenue from tariffs declined 11.2 percent to 256.4 billion yuan.

However, with a steady economic recovery, China's fiscal revenue improved quarter by quarter and delivered a better-than-expected outcome, said the MOF, adding that fiscal revenue has sustained monthly positive growth since June.

The country has also granted export tax rebates worth 1.45 trillion yuan, effectively boosting the steady expansion of the export sector.

China's economy has been on a steady growth recovery track, said the MOF, noting that uncertain factors related to the pandemic and the external environment remain, and the foundation for further economic recovery is not sufficiently solid.

Next, the ministry will further improve tax and fee cut policies, maintain the continuity and stability of policies, and offer necessary support for recovery, it said.

Thursday's data also shows that at the end of 2020, the balance of local government debt came in at 25.66 trillion yuan, within a quota of 28.81 trillion yuan approved by the country's top legislator.

The aggregate balance of government debt stood at 46.55 trillion yuan at the end of last year, accounting for 45.8 percent of China's GDP, which is well below the 60 percent international warning line, said the MOF.