Mobile phone shipments in China fell to 389 million units with a 6.2 percent decrease in 2019, while the 5G phones witnessed a comprehensive growth, with 13 million units shipped last year, a report said. 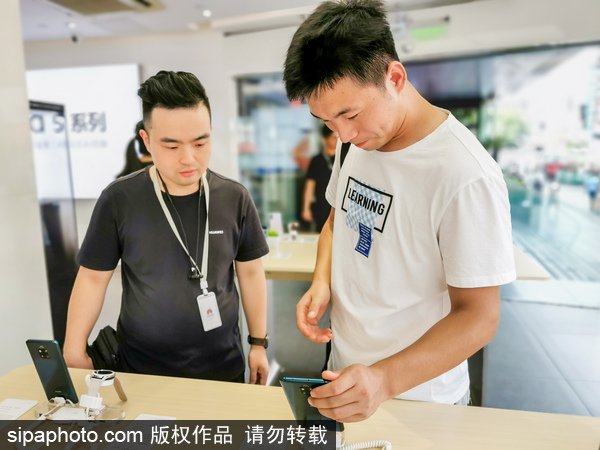 A customer who made an online appointment for a Mate 20 X (5G) mobile phone comes to the store to pick up the goods in Shanghai, Aug 16, 2019. (Photo:Sipa)

According to the China Academy of Information and Communications Technology, Chinese mobile phone market posted a year-on-year contraction of 6.2 percent, with 389 million units in shipments. The 2G phones, 3G phones and 4G phones shipments were 16.13 million units, 58,000 units and 359 million units, respectively.

The smartphone market, accounting for 95.6 percent of the total mobile phone shipments, registered a 4.7 percent decline with shipments of 372 million units in the whole year of 2019.

The drop in shipment coincided with a 25 percent year-on-year fall in numbers of new models, which dropped to 573.

The boom of 5G phone shipments comes as the country launched 5G commercialization at the end of October 2019. China officially kicked off commercialization of 5G services on Oct 31, with the nation's big three telecom operators rolling out their 5G data plans.