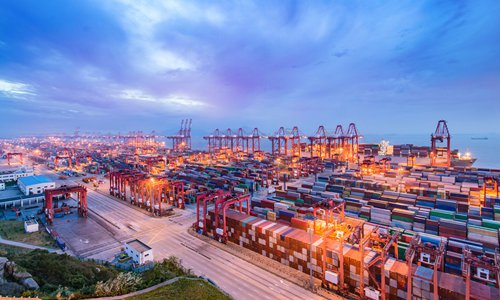 Since the outbreak of the novel coronavirus (COVID-19), media have expressed concern over the Chinese economy. COVID-19 may impact the domestic economy, but its fundamentals will remain unchanged. The engines that drive the domestic economy are just as powerful before the outbreak. The country will not have a problem achieving a 6 percent GDP growth in 2020.

Some have suspected that consumption, the most powerful force driving the economy, has suffered major damage. But China's consumption will skyrocket after the outbreak subsides.

Chinese retail goods are expected to reach 45 trillion yuan ($6.4 trillion) for 2020, an eight percent increase year-on-year. The country's consumer market can still surpass the US as the largest worldwide.

COVID-19 will be an opportunity for China to launch consumption reforms. China can not only conquer such difficulties and challenges with effective countermeasures, but also prompt the country's consumption market to play a bigger role and lead a global consumption market revolution.

The 10-year US Treasury bond yield hit a record low, and the returns on many related investments have fluctuated. China, where investment returns remain high, appears more appealing to investors.

In China, the outbreak has remained under control just as the US is beginning to prepare for it. Capital will likely turn to Asian markets.

COVID-19 will also be a good opportunity to engage in supply-side reform. If such reforms can mobilize production factors, including capital, labor, and technology, and realize high-quality development and governance modernization, then the expenses China has incurred during the outbreak will not be vain. As an important component of supply-side reform, new construction, which covers seven areas including 5G, extra-high voltage, Internet of Things, have since become a hit.

The outbreak has shown China's systemic advantages. The measures China adopted to counter the virus have shown remarkable results.

The Global economy could experience further setbacks as COVID-19 continues to spread in Western countries. China, with the advantages of its system in place, can shoulder more responsibilities to ensure the global economy returns to normalcy after the virus has been wiped out.

China will implement thorough opening-up measures once COVID-19 has been defeated. The country will not only create the best business environment worldwide but also provide greater intellectual property right protection. Foreign companies, private firms, and state-owned enterprises will be placed on equal footing.

Due to China's confidence, its development goals for 2020 will remain the same. With $3 trillion in foreign reserves, most manufacturing industries within the world's second-largest economy, and accomplishment made after 40 years of reform and opening-up, the country shall remain determined to achieve its original six percent economic growth goal.

Under the leadership of the Chinese government and the efforts of all Chinese, the country will realize greater aspirations and long-term goals once COVID-19 is conquered