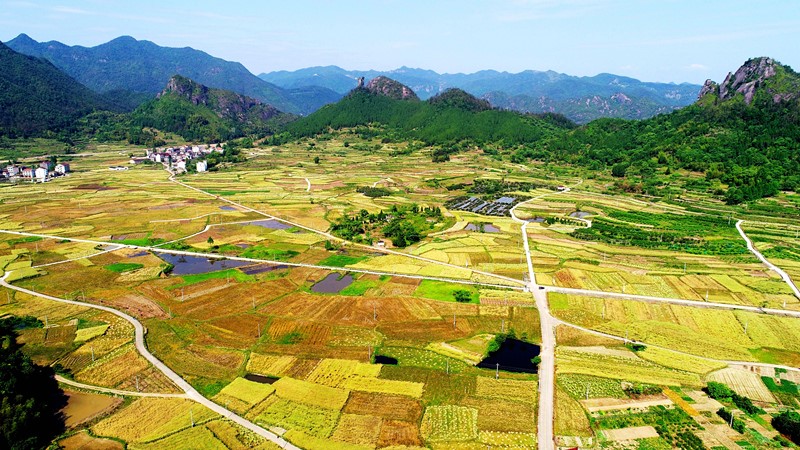 The string of encouraging figures, optimized planting structure, accelerated pace of rural revitalization, and diversified income sources of farmers indicate that China’s agriculture sector, a strategic backyard and ballast stone for economic growth, is ready for a harvest year, which also boosts the country’s confidence and capability to take all kinds of risks.

“This year will be another harvest season,” Liu Fei, a farmer in Hao village in central China’s Henan province predicted after seeing the well-growing wheat. In Hua county where his village is affiliated to, the ocean of wheat is sprouting on 120,000 hectares of fields.

Data from the Ministry of Agriculture and Rural Affairs indicated that with a stable planting area, the winter wheat of this year is expected to produce more than last year, and the spring wheat gives promise of a bumper harvest as well.

In this climax of spring-sowing season, southern China has almost finished transplanting of its early season rice, while northeast China has completed about 40 percent of the planting work. Across the countrywide, 56 million hectares of arable lands, or 60 percent of the planned areas, have been covered by corps, signifying a good start for this year’s grain output.

In the first three months of this year, the added-value of the agricultural sector rose 2.7 percent year on year to 876.9 billion yuan ($128.5 billion), and the per capita disposable income of farmers soared 6.9 percent to 4,600 yuan on average, both maintaining a growing momentum.

Besides the encouraging numbers, the optimized planting structure, better industrial layout and environment-friendly designs also inject impetus into the growth of agricultural sector.

Farmers nationwide are guided by policy makers to adjust their planting plans in response to market demand. Some selected places, for instance, will grow less corns, but more quality varieties in market shortage. What’s more, grain crop will be replaced with feed crop cultivation on over 800,000 hectares of farmland in this year.

Yan Jingwu, a farmer in Suihua city, northeast China’s Heilongjiang province has decided to grow organic rice this year, thanks to the allocation of subsidies as well as the cost-effective performance of the corp.

In addition, about 2 million of farm fields will be covered by trials of crop rotation and fallow systems, a way China designs to relieve the burden on its limited arable land.

The adjustment in planting structure also optimizes the industrial layout by accelerating the agricultural sector’s integration with the secondary and tertiary industries, since the agriculture is more than farming and breeding.

Driven by the state-level modern industrial parks, a host of provincial, municipal and county parks have been set up to commercialize the agricultural products. In Henan, which is described as “grain warehouse of central China”, the grain of wheat can be processed into hundreds of product varieties.

In the first quarter of this year, the agricultural enterprises above designated size registered a business revenue of 3.7 trillion yuan, increasing 5.8 percent year on year. The emerging new industries and business forms in turn motivated the farm work.

So far, China has designated 67.73 million hectares of farmland, or 96 percent of the planned number, as functional zones for grain production and protected areas for important agricultural products.

Targeted policies as well as the funds for agricultural development, water conservancy projects and fiscal supports were combined to develop high-standard farmland with higher yields.

The construction of the two zones envisions to supply 95 percent of food, 90 percent of grains, and 60 percent of the sugar cane demanded by the Chinese people and to guarantee the effective supply of important agricultural products.

In the rural areas, a sped up revitalization pace has endowed the villages with better outlook and dynamic vitality.

Thanks to the "toilet revolution" China launches in rural areas which aims to provide standard and regulated facilities and improve rural residents' living quality, Douzhai village in Guizhou province was lit up by a tourism economy and braced for flooding tourists during the four-day Labor Day holiday that began on May 1.

“The fields and green hills have been turned into parks and gold mountains, and the more beautiful village is now a cash drawer,” said Song Zhijun, an official with the village.

The “toilet revolution” is only part of China’s efforts to improve the living environment in rural areas across the country, during which funds were spent to bring the lucid waters and lush mountains back.

Douzhai village is also a miniature among the parcel of beneficiaries, who were translated into ecological livable homelands with beautiful outlook and rich civilization connotation. An integrated growth of urban and rural areas also makes these villages the gardens of the urban residents.

Thanks to the booming development of agriculture industry and rural areas, farmers, the most important part in rural undertakings, are now accessed to more income sources, rather than only relying on farm work.

The farmers have been provided with more channels to earn money from business operation, employment wages, business property and subsidies, with their incomes from wages posting a 9 percent year-on-year growth in the first quarter.

After an image and brand building as health food, fruits and vegetables, for instance, not only broadened the farmers’ income sources, but also added new content into the traditional agriculture.

The dividends from shares, asset income, together with a series of targeted and efficient subsidies, enriched the wallet of the farmers as well.

In China’s countryside, hundreds of millions of farmers are rushing to a bright future characterized by sufficient and diversified food supply, more earnings and clean ecological environment.