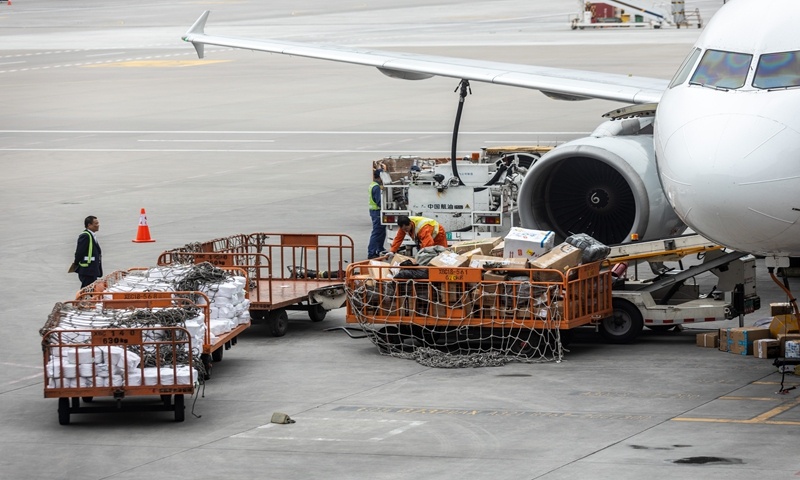 Air cargo prices are expected to rise in China as two cases were confirmed at Shanghai Pudong International Airport resulting in the immediate tightening of epidemic prevention and control measures. Industry insiders and analysts said the freight rates are likely to rise in short term, but will not remain high in the long run.

A total of five coronavirus cases - all involving overseas cargo operators - have been reported since August 20 at Pudong Airport. The airport also reported 8 cases last November, also ground workers at cargo area. Shanghai authorities said they will step up health quarantine protocols for passengers and cargo.

"Due to epidemic prevention and control measures now in place at airports, delivery times will be extended, with efficiency set to fall, adding up to higher costs," a manager surnamed Zhang at a cold-chain logistics company, told the Global Times on Wednesday.

The main concern is that higher prices will trickle down to the logistics chain as efficiency of shipments falls. Normal airport traffic is expected to resume within a week or two, Zhang added.

Short-term transport capacity will be reduced. As the international freight demand remains unchanged, the shortfall of transport supply will cause the freight price rise in the short term, Qi Qi, a market watcher, told the Global Times on Wednesday

Air freight prices have risen 20-40 percent in August on trans-Pacific routes and along trade corridors between Asia and Europe, according to China Aviation Daily.

Overall air cargo rates in 2021 are 90 percent above where they were in 2019, according to a report by the International Air Transport Association (IATA) in July.

"September is the regular peak season of air freight, and typically stretches to the end of the year. Air freight rate demand will remain at a high level," an air logistics agent based in Shanghai told the Global Times on Wednesday.

The agent noted that the high price is predictable as air transport has become more cost-effective than ocean freight during the pandemic, especially for cold-chain logistics.

Shipping by air was 12 times more expensive than by sea in 2019. But the gap was reduced to 6 times in recent weeks, according to IATA data.

Some airfreight users say the gap has been narrowed even further, with some ocean shipments quoted at $20,000 or more. For several popular air freight routes, such as Shanghai to Europe, the rate was $4.08 per kilogram as of July 6, down more than 50 percent since May, according to FreightWaves, a logistics supply chain data provider.

"The international air cargo capacity of Pudong Airport will be restored quickly after the outbreak is controlled and other guarantee resources are increased. Supply and demand will return to equilibrium as soon as possible, and the freight rate is expected to return to the pre-epidemic level in Pudong within 1-2 weeks," Qi noted.

Qi also suggested that China should support the air cargo logistics network amid the latest outbreak of COVIS-19 infections to maintain the stability of industrial chain and supply chain, in a bid to ensure transportation costs stay within a reasonable range. Rising freight costs will push up consumption costs, which could result in inflation.