Tough times call for tough measures. Or so it seems to be the case in a growing number of Chinese provinces, as they are looking at a bold move - extending the universal two-day weekend, which has been widely discussed but not implemented by many across the world - to boost consumption amid an economic slowdown. 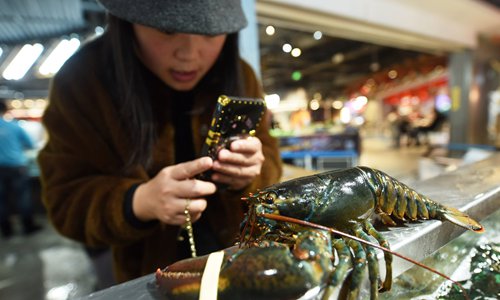 A consumer takes photo of lobsters at a supermarket in Hangzhou, capital of East China's Zhejiang Province on Monday. (Photos: VCG)

North China's Hebei Province recently released an action plan to stimulate consumption. To many netizens' delight, the plan contained a proposal for a 2.5-day weekend in places with the right conditions, among other measures, including paid holidays and flexible working schedules, the Beijing Youth Daily newspaper reported.

Though details vary from province to province, the proposals all seem to aim at boosting consumption in hopes that longer weekends could provide workers with more time to shop.

China's central government discussed the plan as early as 2015, when the State Council, the cabinet, proposed the 2.5-day weekend as a measure to boost tourism spending and consumption.

But intensifying downward pressure may finally push local officials to pull the trigger. As GDP growth is projected to fall to the slowest levels in decades and consumption is also slowing, officials are scrambling for measures to stabilize both.

Retail sales growth fell to 9.1 percent year-on-year in the first 11 months of 2018 from 10.3 percent a year earlier and 10.4 percent during the same period in 2016, figures from the National Bureau of Statistics showed.

Meanwhile, Chinese tourists spent more on domestic trips in 2018, according to the China Tourism Academy. Domestic tourism spending reached 5.99 trillion yuan ($874.18 billion), up 10.9 percent from 2017 and equivalent to 10 percent of the total economy.

However, although the measures are well-intended, they could be hard to implement in some areas, such as hospitals, schools and the police, according to Xu Zhengzhong, a professor at China National School of Administration.

"[China] should study more details to better implement the policy or improve compensation mechanisms," Xu was quoted by the newspaper as saying.