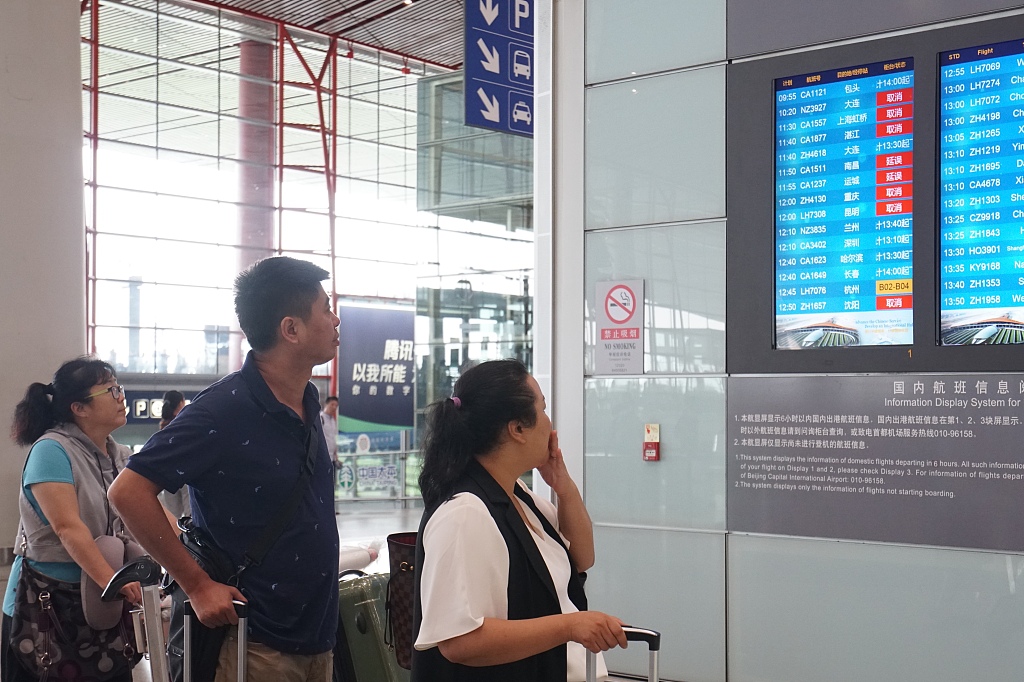 As well as being more convenient for passengers, it is a major step in responding to initiatives in environment-friendly travel. In the first week, about 75 percent of passengers on domestic routes opted to select their seats via digital devices, said China Southern.

Based in Guangzhou, south China's Guangdong Province, China Southern operates the largest fleet in Asia and the third biggest worldwide. In 2018, it recorded 139 million passenger journeys.

"The global aviation industry is at a crucial point. It is transitioning from an increment-driven market to one in which greater value and opportunities are being extracted from the existing market. And digitalization presents a crucial opportunity for China," said Yu Zhanfu, partner and vice president for Greater China at the Roland Berger consultancy.

In January 2018, the Civil Aviation Administration of China(CAAC) issued its Assessment Guidelines on Personal Electronic Devices (PED). It was seen as an impetus to reshape the cabin experience with in-flight Internet.

Since then, domestic airlines have been relaxing bans on in-flight mobile device usage and major domestic aviation manufacturers have been embracing the digital era.

At the 2018 China Airshow, Hainan Airlines announced a partnership with Honeywell that would see Honeywell supply auxiliary power units (APU) and aftermarket support to the airline's fleet, including its GoDirect connected maintenance services, a predictive technology based primarily on data.

With Internet-based predictive maintenance technology, APU maintenance and malfunction data is downloaded from existing data on the aircraft. It allows prediction of imminent hardware malfunctions or other potential problems with a high degree of precision.

The data is then relayed to maintenance crews in an intuitive and visual manner, helping them tackle malfunctions before they occur. This allows for proactive and more efficient maintenance.

In November 2018, the Commercial Aircraft Corp. of China (COMAC) and e-commerce giant Alibaba Group jointly launched the Wang Jian Large Aircraft Workshop, an initiative to explore the use of intelligent manufacturing technology in passenger aircraft. COMAC is the developer of China's C919 large passenger airplane.

It is one of several collaborations between China's Internet giants and commercial aircraft manufacturers to inject technologies like the Internet, big data, cloud-computing and artificial intelligence into aviation manufacturing.

Cathay Pacific and Cathay Dragon have had paperless services on their 15 daily flights between Shanghai Pudong and Hong Kong since October 29, 2018. Passengers enjoy easier and more flexible electronic services including booking, paying, check-in and boarding.

It consolidates upstream and downstream resources for air travel and tourism, and is a mobile application platform, offering one-stop shopping and door-to-door service for customers.

"Digitalization opens a new horizon with regard to safety, efficiency and cost for both aircraft manufacturing and civil aviation sectors," Xu said.

Aircraft is the "asset-heavy" product with great individual value. It can create an extremely long industrial chain covering research, development, operation and maintenance, all of which have significant value, and it is constantly generating enormous amounts of data.

Digitalization is inevitable for aircraft manufacturers and systems vendors, Xu believes. In the design phase, digital systems and methods are increasingly applied, significantly enhancing the efficiency of design, research, development and testing while reducing costs.

For example, airlines can lower maintenance costs by predicting the health of aircraft equipment using big data, while passengers enjoy communications and entertainment in "connected aircraft".

"Aircraft makes money for the airline only when it is flying, and revenue ceases as soon as it lands," Yu said.

So if technicians could sense the aircraft's "health" by using data generated by it and carry out predictive maintenance, "it's a safer and more profitable operation", Yu said.

In fact, technicians can monitor and assess the health of an airplane while it's in the air by analyzing real-time data and selecting the appropriate time to carry out maintenance, repairs or replacement of parts.

The International Civil Aviation Organization has forecast that China will be the world's largest civil aviation market by mid-2020.

In 2018, China's civil aviation industry hit a new record with more than 100,000 flights. Passenger numbers were up 11.4 percent year on year to 610 million and cargo was up 6.3 percent to 7.5 million tonnes, according to the CAAC.

Digitalization is an opportunity for China's aviation industry to leap ahead, Xu said.

The CAAC will plow ahead this year with promoting digital systems, and China's civil aviation authorities will push forward integration of the civil aviation sector with new technologies such as facial recognition, automatic vending and luggage check-in, and intelligent inquiry services.

The CAAC will also encourage the integration of new artificial intelligence and biological feature recognition technologies with its security operations, as well as promote in-flight connectivity.

"The digital era opens an entirely new frontier for aircraft research and development, civil aviation operations and maintenance, bringing enormous value. The industry's boundary is slowly being eroded as the trend takes hold," Yu said. "A more open China will create greater collaborative and win-win opportunities for the world."