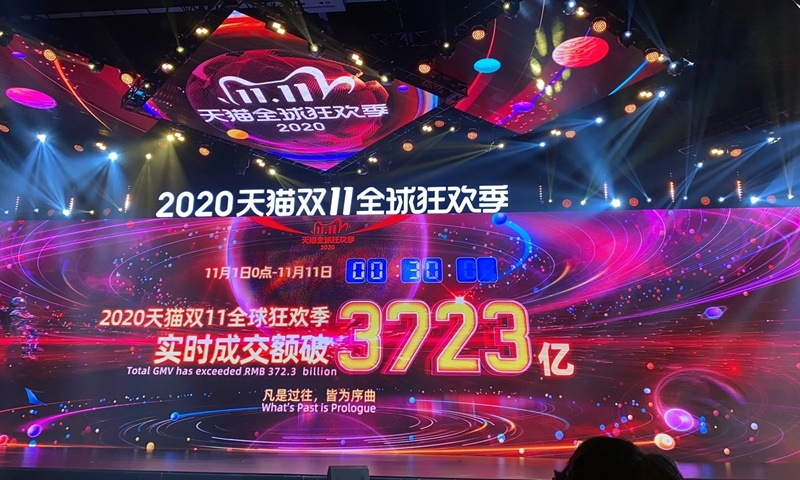 As of 00:30 on Wednesday, the due day of the shopping feast, the total gross merchandise volume has surpassed 372.3 billion yuan ($56.27 billion) on Tmall, with up to 583,000 orders per second during the presale starting October 20, Alibaba said on Wednesday.

Against the backdrop of China's continued economic and retail sector recovery, this year's Double 11 presents new opportunities for merchants and is set to revive consumption more widely in society.

Consumption plays an increasingly important role in driving economic growth. According to UBS, China is the biggest contributor to global economic growth and 76 percent of China's growth in recent years has come from consumption.

Alibaba has enabled a strong rebound for 250,000 merchants following the impact of the pandemic in China, and over 30,000 overseas brands from more than 220 countries and regions are participating in this year's event, bringing 1.2 million imported products.

The most popular brands are Xiaomi, Huawei and Midea, and the most popular export destinations are the US, Russia and France, per Alibaba. Sales of Xiaomi exceeded 1 billion yuan in 10 minutes on all platforms on Wednesday.

Data from Suning shows that online shopping orders from November 1 to 01:00 on November 11 were up 72 percent than the same period last year. In one hour on November 11, the sales of big-size TV set surged 161 percent year-on-year.

JD.com saw orders from 00:00 on November 1 to 00:09 on November 11 exceed 200 billion yuan. Sales of Haier, Midea and Gree surpassed 100 million yuan in one minute, with Huawei taking 7 seconds to reach the mark on JD.com.

According to a survey by consulting firm Oliver Wyman, 86 percent of Chinese consumers are willing to spend the same or more money than last year's Singles' Day event. Considering the background of epidemic prevention and control this year, consumers use this shopping festival more than in previous years to release pent-up demand.

Largest in the world

While domestic e-commerce platforms left no stone unturned to outpace their competitors, they have left their foreign rivals far behind.

Adobe Analytics estimated that the sales in 2019 for the Black Friday event - from Thanksgiving through Cyber Monday - topped $29 billion, up 19 percent from 2018. Meanwhile Amazon's Prime Day achieved about $10.4 billion in sales in 2019, up 45 percent from the previous year.

Analysts said the festival will be the biggest consumption spree of the year, as some 800 million consumers are estimated to take part in the online shopping event. Transactions this year of all e-commerce platforms are expected to reach 856.74 billion yuan, according to a report from the China E-Commerce Research Center.

In a year marked by challenges brought by the pandemic, merchants from all categories have rushed to embrace livestreaming as a way to accelerate their digital transformation.

Taobao Live currently covers almost all retail categories on Alibaba's e-commerce platforms, including apparel, cosmetics, and agricultural products. In just 10 minutes of the first presales day on October 20, the number of Taobao Live transactions exceeded that of the entire year in 2019.

AliExpress, another platform under Alibaba, is broadcasting 8,000 livestreams to consumers across the globe. And with 2,000 livestreams due on the day of Double 11, the figure is four times higher the number of streaming sessions of last year.

Chinese businesses and institutions and overseas influencers have also started to make use of livestreaming e-commerce. This year's livestreams have a competitive element - hosts from different countries. Among the participants are 160 hosts from Russia, 73 from Spain, 60 from France as well as 89 English-speaking anchors.

"New forms of online shopping have boosted domestic demand and attracted consumers. Livestreaming, which e-commerce platforms are attaching more and more importance to, has become a new growth point in e-commerce sales, and the penetration rate is increasing rapidly," Mo Daiqing, a senior analyst with the China E-Commerce Research Center, told the Global Times on Wednesday.

On November 1, the amount of livestreaming shipments increased by 5.3 times compared with that of 6.18 (June 18 festival) this year, according to JD.com.

Chinese market regulators have solicited public opinions on a draft anti-monopoly guide for platform economy on Tuesday, just ahead of the online shopping spree, which dragged down the stocks of Alibaba of 7 percent and that of JD.com 6 percent on Hong Kong market on Wednesday.

But analysts said the impact will only be temporary and will not affect the transaction volume of this year's Double 11, which will see an annual growth.

"In a short term, the stock valuation and expectation will decline, but over time, the industry compliance will become stronger and stronger, which is favorable to the development of e-commerce and digital platforms. The anti-monopoly guide, in fact, is intended to help platforms better embrace regulatory changes," Wang Peng, an assistant professor at the Gaoling School of Artificial Intelligence at the Renmin University of China in Beijing, told the Global Times on Wednesday.