Over the past 10 years, China's bond market embraced the world with broader and more convenient channels for investors and bond issuers to benefit from the development dividends of the Chinese economy.

From widening access and lowering threshold to simplifying procedure requirements, a host of investment channel expansion and facilitation measures were taken to accelerate the paces of opening up of the bond market.

In February 2016, more types of overseas financial institutions such as commercial banks, insurers, securities companies, and fund firms were permitted to enter the interbank bond market and conduct transactions such as cash bond trading.

Through the opening up moves, China's bond market has been one safe haven for global financial market players and RMB-denominated bonds have also been favored as an emerging asset type.

Industry experts said that with rapid growths in recent years, panda bonds have become an effective means to facilitate cross-border investment and financing of overseas issuers.

On boosting bond issuance in Hong Kong, China allowed in May 2012 qualified non-financial institutions from the Chinese mainland to issue RMB-denominated bonds in HKSAR, injecting new impetus into the primary bond market there.

Moreover, the anticipated quicker bond issuance will further enrich the RMB-denominated investment products in HKSAR and expand the channels of usage for overseas RMB, said a HKSAR-located bank trader, adding that these will be good for drawing more overseas enterprises and financial institutions to put RMB into their baskets of reserve assets.

Besides, southbound trading under Bond Connect kicked off in September 2021, providing a convenient channel for Chinese mainland institutional investors to invest in offshore bonds via Hong Kong bond market.

With northbound and southbound trading both in operation, the two-way opening up of China's bond market will contribute to improving the global acceptance of RMB and speeding up the internationalization of RMB, held analysts.

Statistics with the People's Bank of China (PBOC), the Chinese central bank, showed that by the end of June 2022, China's bond market had grown from the world's third largest one to the second largest, with aggregate outstanding bonds at 141.7 trillion yuan, more diversified products and greater favor from global investors in recent years. 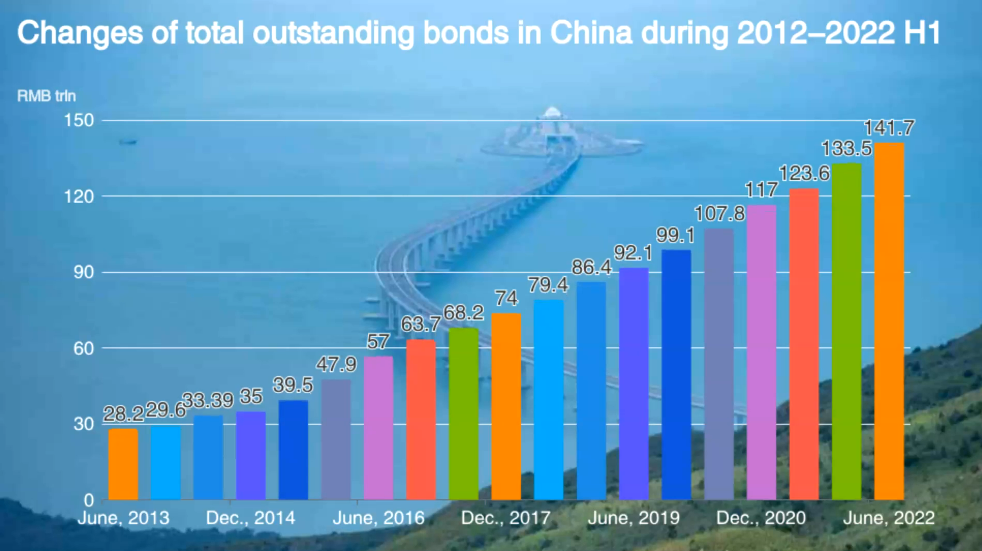 By June this year, bond holdings by overseas institutional investors increased all the way from 436.776 billion yuan in June 2014 to 3.289 trillion yuan, according to data with China Central Depository & Clearing Co., Ltd.

In the first half of 2022, however, overseas investors slightly reduced their bond holdings because of the higher 10-year U.S. T-bond yield thanks to the U.S. Fed's balance sheet reduction and interest rate hiking and the weaker Chinese currency as well.

But currently, the yield spread between the 10-year T-bonds of China and the United States stands still at relatively high levels in terms of real interest rate and due to the high inflation in the United States.

As a sound vehicle for global investors to diversify portfolios, RMB-denominated bonds are expected to attract more mid- and long-term investment into China's bond market in the future, analysts said.