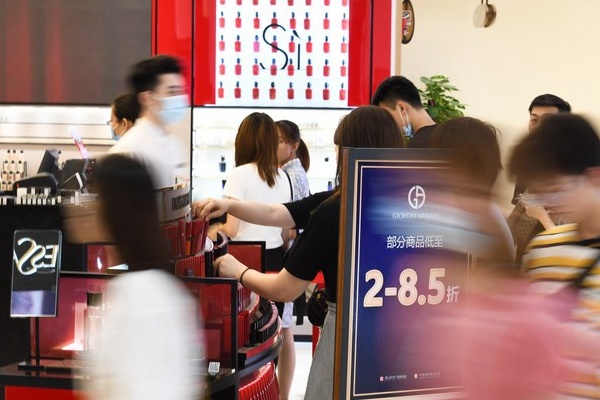 Inside a duty-free shop in downtown Haikou, capital of south China's island province of Hainan, Su Yanqing was selecting a watch for herself.

"I had decided to buy a watch before I came here," said Su, a tourist from Xiamen, east China's Fujian Province. "The price in the duty-free shop is definitely lower than in ordinary shopping malls." Besides picking a watch worth about 10,000 yuan (about 1,447 U.S. dollars), she also planned to buy cosmetics and skincare products.

From July 1, Hainan has increased its annual tax-free shopping quota from 30,000 yuan to 100,000 yuan per person. The number of duty-free goods categories has also expanded from 38 to 45, with products such as mobile phones and laptops added to the list.

The previous tax-free limit of 8,000 yuan for a single item has also been scrapped, and the number of categories with a single-purchase quantity limit has been significantly reduced. For example, the duty-free single purchase limit for cosmetics has been raised from 12 items to 30.

"I no longer need to worry about the number of my purchases," said Liu Yue, a local citizen who bought a dozen skincare products in the duty-free shop.

"Thanks to the new policy, we can buy more expensive items now," she continued, appreciating the new policy for stimulating consumption.

Retail travel business has been under pressure since the COVID-19 outbreak due to the sharp fall in international travel. However, China's duty-free consumption is accelerating thanks to policy incentives.

In March, Chinese authorities unveiled new guidelines to boost consumption and unleash the potential of the domestic market, and vowed further reforms for the duty-free sector, including the building of a number of urban duty-free shops with Chinese features and expansion of duty-free business at ports.

Chen Xi, director of the Hainan provincial department of commerce, said the newly-introduced duty-free goods were welcomed by customers, with mobile phones, liquor and tablets being the best-selling products.

Total sales of single products priced above 8,000 yuan reached nearly 1.2 billion yuan from July 1 to Aug. 18, surging by 420 percent year on year. "It has played an important role in winning back consumers who used to buy high-end products overseas," Chen said.

According to a research report by UBS in July, the new duty-free policy in Hainan could significantly drive the sales of fashion and luxury products such as bags, jewellery and watches. It estimated that the contribution of fashion and luxury products in total offshore duty-free sales in Hainan would rise to 40 percent by 2025 from the current 15 percent.

A report on Chinese outbound travel spending by Trip.com Group and UnionPay International showed that China spent 127.5 billion dollars on outbound travel in the first half of 2019, a significant part of which was spent on overseas shopping.

Affected by the epidemic this year, many consumers were unable to go abroad and had to shop at domestic market.

At a major duty-free store in Jing'an District of Shanghai which opened in 2016, there are nearly 300 international brands of cosmetics, clothing, bags, kitchenware and food.

Wang Yuqin, the store manager, said that the sale this year was encouraging. "Under normal circumstances, customers need to be Chinese passport holders who have arrived from overseas within 180 days. But due to the epidemic, we've relaxed the rules so that more people are eligible to purchase with the support of authorities."

Duty-free sales in China exceeded 50 billion yuan last year and are expected to exceed 150 billion yuan in 2025, according to estimates by China Securities.

"For international brands which have entered the Chinese market, duty-free stores provide more channels and opportunities for them to enjoy the dividends in this broad market," said Chen Wen, principal of leading consulting company Oliver Wyman.