Visitors to the World Robot Conference 2021 can hardly miss the chance to meet with a robot guide roaming at the exhibition venue in Beijing as they immersed themselves in the intelligent future shaped by the latest robotic technologies. 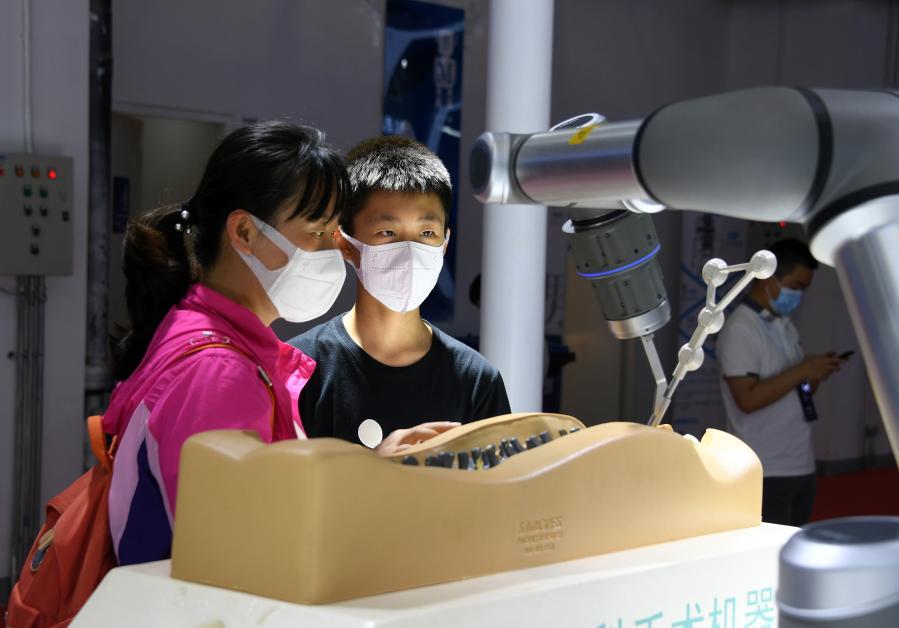 A number of the robots, Opti, impressed the visitors with their chubby orange appearance, funny expressions and smart hand gestures at the four-day event that concluded on Monday.

Terminus Group, the Chinese developer of Opti, said 152 of their products will serve as mascot robots at the upcoming Expo 2020 Dubai. The intelligent machine will greet and interact with visitors, respond to information inquiries, and provide services such as food and beverage delivery.

In addition to the service robots, the World Robot Conference 2021 displayed a wide range of application fields -- from space to deep sea research, from factories and workshops to fields, and from major projects to people's daily life.

More than 110 enterprises and scientific research institutions brought over 500 products that represent new technologies in the upstream and downstream segments of the robot industrial chain.

A live demonstration of robot-assisted orthopedic surgery became a hit during the conference. Guided by an optical tracking system, a mechanical arm controlled by a computer master console skillfully performed the surgery on a model of the human spine.

Chen Jinhu, a staff member of Beijing Tinavi Medical Technologies Co., Ltd., said the surgery is guided by the company's telemedicine system, which has allowed doctors at Beijing Jishuitan Hospital, which specializes in orthopedics, to successfully carry out telesurgery on patients across the country.

"Research and development in the orthopedic surgery robot involves many disciplines such as medical science, mechanics, biomechanics and computer science, as well as the collaboration of universities, companies and hospitals," said Chen.

In China, key technologies such as 5G and artificial intelligence have been widely used in new-generation robots. The development of robots will feature an internet-based trend with autonomy, collaboration and dexterity, according to Wang Yaonan, an academician with the Chinese Academy of Engineering.

According to the National Bureau of Statistics, the output of Chinese industrial robots increased from 72,000 units in 2016 to 212,000 units in 2020. Service and special robot manufacturers in China earned 52.9 billion yuan (about 8.21 billion U.S. dollars) in revenue last year, a year-on-year increase of 41 percent.

Sixty percent of the company's products are now used in the automation and robot-related industries led by semiconductors, new energy and biomedicine sectors.

"The vigorous development of China's robot industry has brought opportunities to SMC. We saw sales rise over 50 percent in the first eight months," Ma said.

Zhang Jin, vice president of Siasun Robot & Automation Co., Ltd., said due to the COVID-19 pandemic, the overseas demand for industrial robots continued to grow, and the company's exports have more than tripled this year.

The Shenyang-based company has set up overseas branches. "We have cooperated with overseas universities and research institutes to carry out research and development catering to local needs. Cooperation in the robot industry is deepening and creating new driving forces for the world economy," he said.

Experts at the conference pointed out that while robot-related technology integration and innovation have made continuous progress, it is still difficult to comprehensively integrate industry, learning, research and investment due to bottlenecks such as intellectual property ownership, interdisciplinary talent training and disconnection between application scenarios and product innovation.

Many places in China are striving to create incubators favorable to the integrated development of the robot industry.

Liu Li, deputy director of the management committee of the development area, said the local robot and intelligent manufacturing industry is expected to become an industrial cluster with an industrial scale worth 100 billion yuan by 2025.