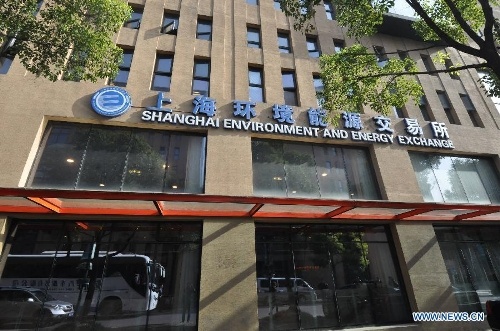 Photo taken on Nov. 26, 2013 shows the exterior of the Shanghai Environment and Energy Exchange(SEEE) where the inaugural ceremony of the carbon emission trading program is held in Shanghai. (Photo: Xinhua)

China's national carbon market may start trading as soon as next month after a slight delay, although it might adopt moderate standards to accommodate the varied emission scales of different companies in the beginning, industry observers told the Global Times on Tuesday.

While the launch of what will be the world's largest carbon market is a little bit behind an end-June target, it won't have any impact on China's goal of hitting peak emissions before 2030 and achieving carbon neutrality by 2060, analysts noted.

The overall plan has already been sketched out, and plans are pushing forward steadily, observers said.

Lin Boqiang, director of the China Center for Energy Economics Research at Xiamen University, said that the market will be rolled out as soon as possible, maybe next month as preparations are complete.

It's unclear when the carbon market will begin trading, a person at the Shanghai Environment and Energy Exchange, which will host the trading, confirmed to the Global Times on Tuesday.

"We still have not received clear information on the opening date of the market," the person said, adding that the exchange was awaiting instructions from the superior department.

A person familiar with matter told the Global Times on Tuesday that there was no update on the plan. Officials said in May that it planned to launch online trading by the end of June.

The long-awaited national carbon market, which will put a price on carbon, is deemed as an important mechanism helping China to achieve its carbon neutrality goal in 2060.

A national-level market is expected to effectively standardize and curb the emissions of energy-intensive enterprises and boost cleaner resources such as solar and wind power, Lin told the Global Times on Tuesday.

The market is intended to set emission permits and quotas for companies to release carbon dioxide. Those that fail to acquire permits or do not have sufficient quotas will have to buy them on the market or cut their emissions. Those with spare allowances can sell the quotas for profit.

The market will initially cover more than 2,200 companies in China's power sector, according to the Shanghai Environment and Energy Exchange.

China's market - once online - would overtake that of the EU to become the world's largest, covering 12 percent of global carbon dioxide emissions, according to media reports.

The biggest barrier for launching a national market lies in the establishment of a multi-dimensional and flexible trading mechanism, analysts said.

"It is very difficult to set a unified cap on carbon emissions because CO2 emissions vary in different regions, as does demand for electricity. Some provinces' energy consumption tilts to hydropower, while others such as East China's Shandong mainly rely on coal," Han Xiaoping, chief analyst at energy industry website china5e.com, told the Global Times on Tuesday.

As the launch is "imminent," analysts said that the challenges could be fixed along the way. But the standards for carbon emissions set at the beginning might be relatively moderate and prudent to reduce the impact on the overall economy, Lin said.

A slight delay for the market will not sway China's determination to shift to a greener economy, analysts said.

"China has set a clear roadmap in achieving the target, which will be carried out step by step, even without the national trading market," Han said. "As China steadily advances toward clean energy, the scale of the market is expected to shrink year by yea."

According to a notice jointly issued by the National development and Reform Commission, China's economic planner and the National Energy Administration, China's total energy consumption is expected to be controlled within 6 billion tons of standard coal equivalent by 2030.

Under the plan, Han said that there is still room for "moderate" carbon emissions growth, and the country's energy consumption from 2020 to 2030 should peak at 800 million tons of standard coal equivalent.