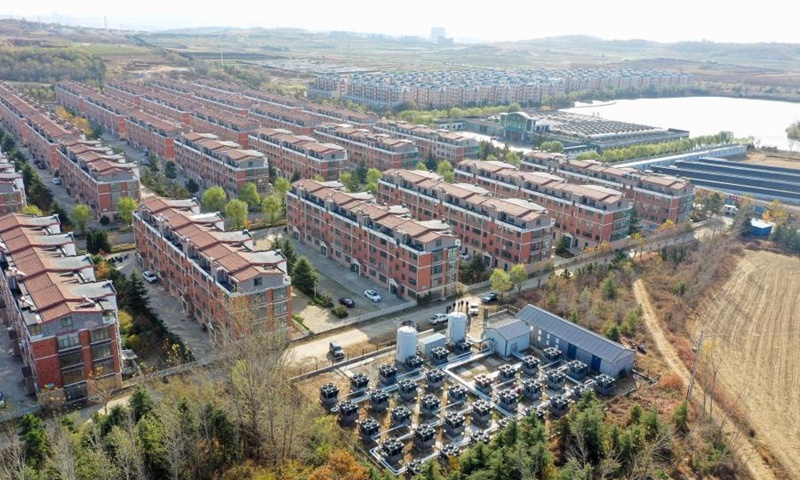 Aerial photo taken on Nov. 12, 2020 shows a heating station with clean energy at Wendeng district in Weihai, east China's Shandong Province. Shandong launched a campaign to promote a shift from coal to electricity for 358,400 households during its heating season in 2020, which will save 270,000 tonnes of standard coal and reduce emission of 680,000 tonnes of carbon dioxide in the heating season. (Xinhua/Zhu Zheng)

China's current commitment to carbon neutrality before 2060 will advance and accelerate the global carbon neutrality by 2065-2070 under the Paris climate agreement, said Xie Zhenhua, Special Adviser on Climate Change Affairs, Ministry of Ecology and Environment of China, at the Bloomberg New Economy Forum via video link on Thursday.

China is expected to see CO2 emissions peak before 2030 and achieve carbon neutrality before 2060, Chinese President Xi Jinping announced on September 22 at the general debate of the 75th session of the United Nations General Assembly via video link.

The goal was further stressed by Xi at the 12th summit of BRICS on Tuesday.

Xi called on the BRICS countries to uphold green and low-carbon development when addressing the summit via video link.

Xi was quoted by Xinhua News Agency as saying "global warming will not stop due to COVID-19. To tackle climate change, we must never relax our efforts. China is prepared to take on international responsibilities befitting its level of development, and will continue to make extraordinary efforts to address climate change."

China's pledge for carbon neutrality has gained broad support from many in the international community.

China's current commitment to carbon neutrality before 2060 has given a push to a large part of global society to lead green development, Xie Zhenhua said, noting that following China's commitment, the European Union, Japan and South Korea and UK have proposed their own targets to achieve carbon neutrality.

"All together these targets have already accounted for 50 percent of global emissions. I believe that as long as all countries work together, the goal to keep global warming below 2 C under the Paris agreement can be achieved," Xie said.

Although China is disappointed at US' retreat from Paris agreement, both countries have maintained communication through provincial governments, enterprises, think tanks and negotiating teams, said Xie on prospect of US-China climate cooperation.

He noted that it will take about 60 years for the EU to transition from the peak of carbon emissions to carbon neutrality, 45 years for the US and China's goal to achieve it in 30 years means both challenge and an opportunity for the country.