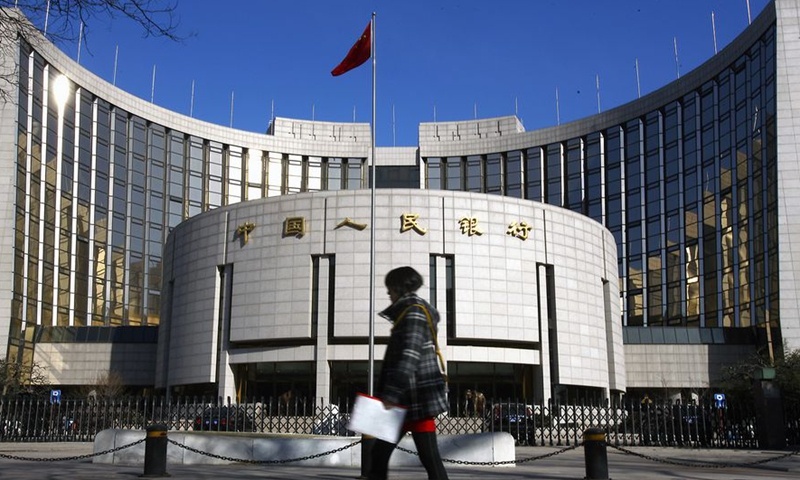 A file photo shows a pedestrian walks past the headquarters building of the People's Bank of China in Beijing, capital of China. (Photo: Xinhua)

The People's Bank of China (PBC), China's central bank, has imposed fines worth a total of 11.53 million yuan ($1.77 million) on four domestic banks and a number of individuals for illegal handling of credit information. Experts have said the move reflects the PBC's determination to create a fair credit environment amid perceived rising market volatility.

The four banks are the Bank of Communications, the Postal Savings Bank of China, the Huaxia Bank and the Industrial Bank, which violated rules relating to the collection, supply and request of credit information.

The Postal Savings Bank of China received a warning and a 6-million-yuan penalty from the central bank, the highest penalty amount among the four banks.

Another management consultant from the Bank of Communications' credit card center was also fined 70,000 yuan by the central bank for illegally collecting and supplying sensitive credit information. The bank itself received a fine of 620,000 yuan from the PBC.

Besides the four banks mentioned above, the China Construction Bank received a warning and 3.88-million-yuan penalty for tying up financial deposits and capital, as well as violating account management regulations

This is the second time that the central bank has imposed fines on domestic banks this year. In February, the PBC imposed a fine of 28.90 million yuan on the China CITIC Bank for not preserving client identity data and transaction records in line with regulations.

The central bank has tightened management on domestic banks, including state-owned instructions in recent years, aiming to create a more fair and transparent credit environment, one expert said.

"In recent years, the phenomenon of banks siphoning excessive amounts of client information for promotion purposes has become increasingly common, which has heightened scrutiny from authorities. If the situation is not curbed, it has the potential to damage the country's credit system, impacting societal cohesion," Xi Junyang, a professor at the Shanghai University of Finance and Economics, told the Global Times on Sunday.

He also noted that the central bank's standards for state-owned banks is equally strict to that of their private counterparts, signally that being owned by the state is not a free pass on ducking regulations.

"If the central bank is lenient on state-owned banks, it would set a very bad example for private financial institutions," he said.