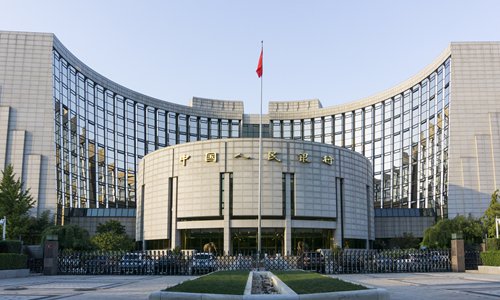 The headquarters of the People's Bank of China in Beijing in October 2018 (Photo: IC)

The People's Bank of China (PBC), the country's central bank, has improved a key interest rate mechanism to reduce borrowing costs, a move that experts said is intended to help enterprises and boost the economy after recent figures pointed to growing downward pressure.
"By perfecting the loan prime rate (LPR) mechanism, loan rates will edge down via market-oriented reforms," a representative of the PBC said on Saturday.
According to a PBC document published on its official website, the new LPR quotations will be based on open market operation rates - mostly the medium-term lending facility (MLF) - and will be published by the national interbank funding center once every month starting Tuesday.
Most Chinese banks now refer to the benchmark lending rate, which rarely changes, when offering loans. Thus, even when market rates are declining, domestic borrowers don't get lower rates.
"Starting immediately, all banks must mostly refer to the LPR when setting rates on new loans…banks cannot set implicit bottom lines of the LPR in any form," read the PBC statement.
The one-year central bank LPR is currently staying at 4.31 percent, compared with the PBC's one-year benchmark lending rate of 4.35 percent, PBC data showed.
The PBC also said it would add eight banks, including urban commercial banks, rural commercial banks, overseas banks and private banks, to the 10 major domestic banks that will be allowed to submit LPR quotations.
Chen Ji, an economist at the financial research center of the Bank of Communications, told the Global Times on Sunday that under the new LPR mechanism, the central bank can more efficiently channel the influence of its monetary policy to the market by closely pegging the LPR with the MLF.
Experts said previously that the PBC was more inclined to use open market operation tools like the MLF than adjusting benchmark rates.
"The market will be able to understand the central bank policy inclination more explicitly under the new LPR mechanism," Chen said.
But experts at the Bank of Communications financial research center also noted that when the MLF is closed linked with the credit market, the government might become more cautious when using open market operations in the future, according to a report the research center sent to the Global Times.
Figures released by the National Bureau of Statistics showed that the economy shrank in the manufacturing, consumption and services sectors in July.
The government has cut taxes and fees this year to make business easier for companies.
Zhou Yu, director of international finance under the Shanghai Academy of Social Sciences, told the Global Times on Sunday that just relying on fiscal policy is not enough when the economy is facing rising pressure from the trade war and weak internal demand.
"The government wants to cope with such downward pressure by helping steer borrowing costs lower. It also reflects the marketization direction of China's financial reforms," Zhou said.
Experts of the Bank of Communications research center warned that the new mechanism might add pressure on small banks which, compared with large banks, have weaker pricing abilities and are less able to attract good clients.
They also cautioned that the LPR reform might cause liquidity or credit risks at small banks. Therefore, the government can diversify its methods to allow some flexibility to those banks.