China is likely to expedite the process of a central bank-backed digital currency, as officials and analysts rush to underscore the importance of digital currency and the underlying blockchain technology in the wake of Facebook's cryptocurrency plan that some said could challenge other countries' financial sovereignty. 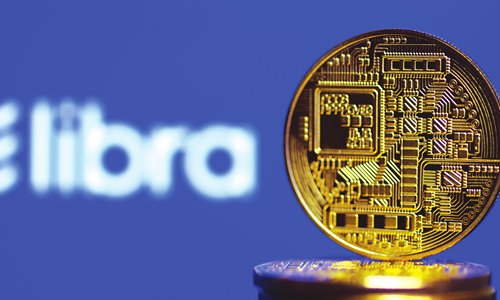 While many Chinese analysts argued that Facebook's Libra, which is facing intense scrutiny in the US, is unlikely to succeed, they also called for the People's Bank of China (PBC), China's central bank, to accelerate its planned launch of a digital currency to safeguard the nation's monetary and financial authority against threats posed by the rise of cryptocurrencies.

"Personally, I don't believe that Libra will succeed," Huang Qifan, vice president of the China Center for International Economic Exchanges, told a financial forum in Shanghai on Monday, arguing that the decentralized currency lacks "sovereign credit" and its value can't be stable.

However, Huang, who is also a former mayor of Southwest China's Chongqing Municipality, noted the threat that Libra  posed to sovereign currencies and argued that digital currencies should also be issued by governments and central banks.

Huang also said that the PBC's digital currency/electronic payment (DC/EP) plan must have been "mature" after five-six years of study. "The PBC could be the first central bank in the world to issue a digital currency," he said.

The PBC launched the DC/EP program in 2014 and has made "positive progress," PBC Governor Yi Gang told a press conference on September 24. But unlike other cryptocurrencies, the PBC's unit would remain under centralized management. Also, it would only replace part of M0, or cash in circulation, and current channels of money supply would not be altered, Yi said. He added that there is no timetable for the launch of the currency.

However, Cao Yin, an insider in the blockchain sector, said that the PBC should already have a clear roadmap of its plan as many officials have indicated. "I think the PBC has both the resolve and the capability. There is no issue with the roadmap," he said.

The PBC's plan has gained renewed attention with China's top leadership calling for more efforts in blockchain development, lifting the whole sector, and with Facebook continuing to push forward its Libra program, despite firm regulatory resistance.

During a US Congressional hearing last week, Facebook CEO Mark Zuckerberg specifically mentioned China as a potential competitor for innovation and even financial dominance that he argued the Libra program would ensure.

"China is moving quickly to launch similar ideas in the coming months," Zuckerberg said, according to a transcript of his remarks. "Libra will be backed mostly by dollars and I believe it will extend America's financial leadership…If America doesn't innovate, our financial leadership is not guaranteed."

Facebook launched the ambitious project in June, aiming to issue a blockchain-based cryptocurrency for its billions of users and others around the world, bypassing central banks and banking systems. The program has faced tough resistance from regulators in the US and Europe over the potential risks of aiding illegal activities, among other issues.

"For any country, if one currency could bypass its banking system and immerse itself into the social and economic life, it will undermine the country's grip on its own currency and that is no different than violating its territory and sovereignty," Shentu Qingchun, CEO of Shenzhen-based blockchain company BankLedger, told the Global Times on Monday.

Shentu said that Facebook did not peg its Libra to the yuan, apparently trying to win over US regulators with "political correctness" regarding China. "But like Zuckerberg said, if we don't do it, the US will do it. We have to respond in kind."

Analysts said the PBC's DC/EP could serve as a countermeasure to Facebook's Libra or other similar moves that threaten to penetrate China's banking and payment system because, unlike Libra, the DC/EP will be backed by domestic banks, financial institutions and third-party payment firms.

Facebook was facing the risk of losing partners, such as US payment firms Visa Inc and Mastercard Inc, as the project comes under regulatory scrutiny, the Wall Street Journal reported on October 2.

But Cao said that Facebook still has some backers and China can't afford to wait. "There is no other option for China but to push forward the development of a digital currency," he said.