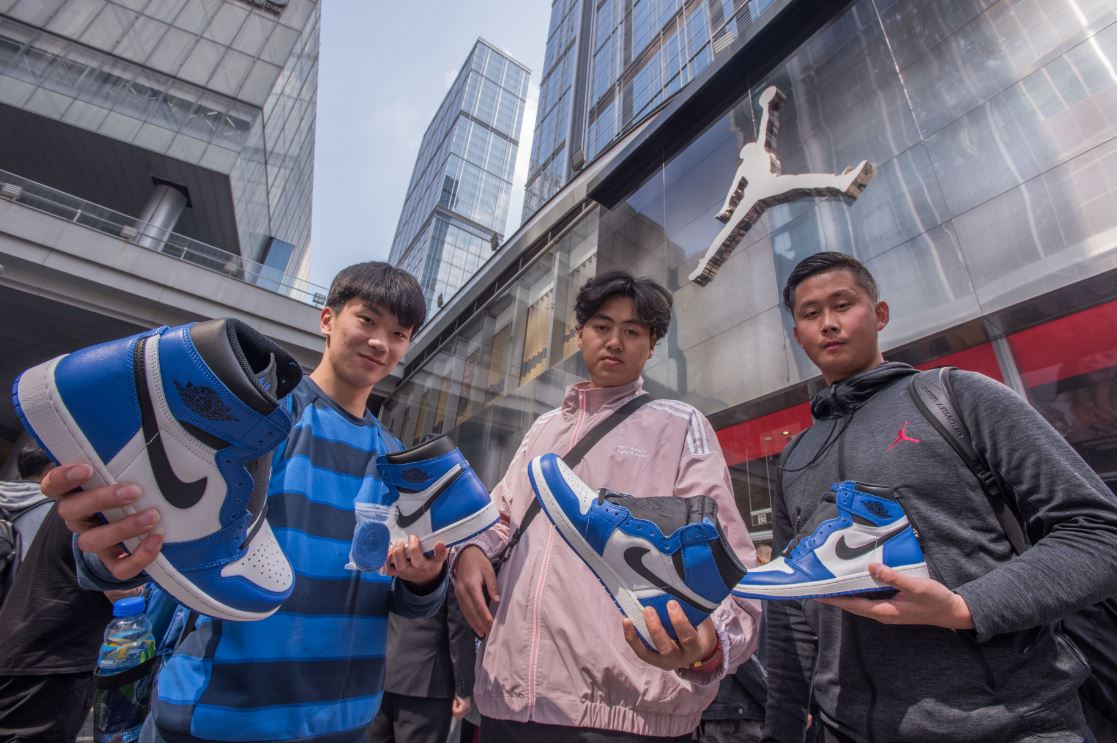 The People's Bank of China, the central bank, has warned that certain practices in sales of sneakers could lead to a bubble and even financial risks.

Experts said reselling of special editions of running and basketball shoes made by global brands such as Air Jordan and Yeezy, which could result in price rises, speculative trading and financial fraud, is attracting regulators' attention.

The Shanghai Head Office of the People's Bank of China said in a financial briefing on Oct 16 that it had found alarming signs of possible financial fraud in the sneaker trade, including illegal fund-raising, illegal use of public deposits and illegal pyramid schemes.

There are more than 10 platforms that allow so-called sneaker-heads to trade shoes as if the products were equities traded on the stock market.

Websites and apps such as Poizon, Nice, SNKRS, DoNew, Get and Drop store have a large amount of trading volumes and notable price fluctuations.

Among them, some platforms even provide indexes for Nike, Adidas and Air Jordan. They have become mini futures and stock markets of sorts, with trading volumes tending to be large, said Wan Zhe, chief economist at Beijing-based China National Gold Group.

For a pair of limited-edition Travis Scott x Air Jordan 6 shoes, retail price per pair can jump from the original 1,500 yuan ($212) or so to between 15,000 yuan and 21,000 yuan on platforms such as Poizon. In the third quarter of this year, prices reached such levels. Buyers usually have four or five, even dozens of apps on their smartphones to buy the coveted sneakers, a trend that has sparked speculative trading in both online and offline channels.

The craze started in 2017. For sneaker speculation, there is now a primary market and a secondary market in China. Sneaker fans have a strong demand for purchasing, selling and collecting shoes, which caused the boom in the secondary market.

Many people appear to be keen on making a fast buck by investing in sneakers with an eye on possible huge returns.

Because a pair of famous branded shoe models could be expensive, some platforms have introduced a number of financial products like consumer loans, which has generated more trading data, Wan said.

The central bank warned about the risks posed by borrowing as some third-party payment agencies were offering installment options and other lending services to these platforms.

It also stressed that the lack of information transparency was worrying, because there will be a huge number of consumers affected if the platforms disappear.

It also called local financial institutions to pay closer attention to such businesses. They need to monitor financial transactions on these platforms closely, identify potential risks in advance and report suspicious activity immediately, especially if they have reasonable grounds to suspect money laundering or other criminal activities.

Zhu Feng, deputy director of the research committee for financial tools at the Shanghai Bar Association, said third-party payment organizations are keen to provide capital to shoe platforms that offer installments and other services, which may create fresh financial risks.

"In the pursuit of higher returns, some buyers have already availed of consumer loans and might have become irrational in their buy decisions," he said, noting once they lose their money in the market, they would have to deal with overdue repayments, and this may eventually affect their personal credit record.

Their actions may lead to piling up of bad debts at financial institutions, said Liu Xianquan, a professor at the East China University of Political Science and Law in Shanghai.

Some sneaker platforms operate in the style of options trading, and such financial operations require official approval and may be suspected as illegal operations, he said. Such action could also create conditions for certain illegal and criminal activities like money laundering.

Guo Xin, a marketing professor at Beijing Technology and Business University, noted that brand owners themselves may be behind some shoes' unreasonably high prices. Sneaker brands including Nike, Adidas and others have fueled a robust market and spawned avid collectors through launch of limited editions.

"Such a 'Hunger Games' model has made certain sneakers available only in wealthy regions, and sparked a raffle method of buying," she said.